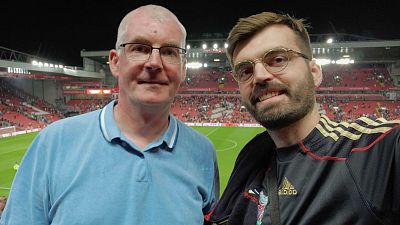 Football fans and travelling go hand in hand. Away days, European fixtures, World Cups, European Championships. Any dedicated fan has inevitably had to travel to see their team in action.

This rings particularly true for fans of clubs outside of their country. As an Irish Liverpool fan, my childhood was full of formative memories travelling the short distance from Dublin to Liverpool to watch the Reds in person.

I was 11 the first time my Dad took me over to a game. Up to that point I hadn’t shown much interest in the sport and after my older brother and sister discarded anything to do with football, I was my Dad’s last hope.

He must have been floundering when the game was a dull, goalless draw against Stoke, but the passion of the fans, the sense of community and occasion and the excitement of travelling had won me over.

We continued the tradition of going to a Liverpool match together once or twice a year for the next decade until something both wonderful and unexpected happened. Liverpool actually became good again and started challenging for titles. The success came at a cost though as tickets became gold dust and our annual trips petered out.

That is until this August when after a six year hiatus we finally got our hands on a pair of tickets through Sportsbreaks.com, a sport tour agency that offers hospitality packages for Premier League matches and other sports.

Sports tourism is a big business. Thousands of fans from all around the world travel to Liverpool every year to feel the famous Anfield atmosphere and see the sights of the city. Liverpool football club boosted the city’s economy by £497m (€585m) in 2019, according to a report by Deloitte commissioned by the club. It’s a similar story in many other parts of England.

How to get to Liverpool

So off we went on a 30 minute Ryanair flight from Dublin, packed with Liverpool fans.

The Liverpool Airport buses were on strike so after a bit of scrambling around we met another Irish father and son duo and shared a taxi to the city centre. I took the plaudits as I batted away the others and paid for the taxi (conveniently forgetting to say that it would be expensed to Euronews immediately after).

With prayers from two denominations on our side, we headed for Anfield with high hopes. The moment we stepped off the bus, we were swept up into the match day atmosphere. It was the first home game of the season, the mid-August sun was peaking through the clouds and there was an upbeat feeling around us.

What always strikes me at Liverpool matches is the sense of community. People from all walks of life, coming together with their friends, parents, grandparents and children to support their favourite team.

We downed a quick pre-match pint, took our seats in the Main Stand and after a rousing rendition of ‘You’ll Never Walk Alone’, they were off.

Our prayers clearly fell on deaf ears as Liverpool went 1-0 down and had a man sent off just before the hour.

My Dad and I began wondering if we were some kind of curse. Since we had stopped going to matches, Liverpool had reached three Champions League finals, winning one of them, along with a Premier League title, the FA Cup and League Cup. Then on our return six years later, they’re losing to a mid-table squad at home.

However, the night was redeemed when they bounced back and scored an equaliser and we left Anfield fairly satisfied with a draw.

What is there to do in Liverpool outside of the football?

Aside from the football, Liverpool as a city is well worth a visit. The people are one of the best parts about being in Liverpool. It’s easy to get chatting to locals when out and about and the famous scouse wit can often be overheard when walking around .

I’m not a massive museum fan myself, but there’s a few in Liverpool I make an exception for.

I’d highly recommend the Museum of Liverpool along the Mersey river which tells the story of the city and its people. There’s a moving exhibition of how Liverpool coped during the Blitz in the Second World War that is well worth your time. Plus, it’s free to enter .

The Beatles are of course famously from Liverpool and their legacy can be seen throughout the city. None more so than in the Beatles Story museum. You can easily spend two or three hours here and it’s an absolute must for any Beatles fans.

A stroll along the Albert Dock which is home to the modern art museum and a host of pubs and restaurants is also worth a visit. The Maray restaurant is meant to be lovely and was recommended to us, but I won’t lie we did just end up going to the nearby Pizza Express which is perfect for a no-frills pre-match meal.

If you're on the hunt for brunch or lunch options, the Moose Cafe is a chain with a few places in the city that will give you a hearty start to the day. Egg Cafe, around the corner from Liverpool Central Station was lovely and had great vegan and vegetarian options.

If a spot of city centre shopping is what you’re after, then there’s Liverpool One. Or pay a visit to St James Mount and the gardens by the Liverpool Cathedral which are the ideal place to get a moment's peace and the gravestones make a fascinating, but sad, read.

When it comes to hotels we stayed at a Premier Inn in the city centre. It has you everything you need from a city hotel and has a lovely all-you-can-eat breakfast. There are loads of budget hotel options in central locations with the likes of Travelodge, Jury’s Inn and Hotel Ibis that we have stayed in during previous trips and have all done the job.

The Liverpool match tickets and hotel were arranged and paid for by sportsbreaks.com. All views expressed in this article are the writer's own.