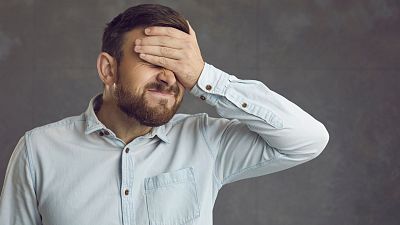 Awkward language miscommunications can lead to serious embarrassment. Here are ten to watch out for.   -   Copyright  Canva   -
By Charlotte Elton  & Hannah Brown  •  Updated: 02/09/2022

Ever accidentally asked about condoms instead of preservatives? Or told a cashier to ‘go to bed’?

For non-native language speakers, embarrassing miscommunications are as common as verb conjugations.

But if you’ve found yourself in one of these awkward situations don’t worry - you’re not alone. According to language learning provider Rosetta Stone, just one quarter of expats are fluent.

Learning a language has many benefits, from cultural immersion to brain-training. Euronews has offices throughout Europe, and some of us are polylingual. But whether you’re an experienced expatriate or a confused tourist, there’s always room for a little (or a lot) of mistranslation.

So if you’re cringing after inadvertently telling a colleague you love them, or insulting a host’s cooking, read on.

Here are some of the Euronews team’s most humiliating language fails.

10. When you proposition a waitress

“Once on a school trip to Russia, my teacher told the waitress 'he had finished,’ not knowing that the modern usage of the word had taken on a sexual context. To give it a more generic meaning, you now need to add the prefix 'za'. Safe to say the waitress doubled over with laughter.” - Hannah

“I’m a non-native Spanish speaker. I once asked for a 'mojito de pechos' (a breast mojito) when I meant peach mojito.” - James

9. When you tell the cashier to go to bed

“After moving to France, I shopped at my local supermarket a lot and often went to the same cashier. She was really nice, and I would cheerfully say ‘bonne nuit' to her in the evening. Eventually, she pulled me aside and told me that you only really say ‘bonne nuit’ if someone is going to bed. The correct term is ‘bonne soirée’ (good evening).” - Ian

8. Getting a little too excited

“Most native English speakers in France will at some point mix up 'cul' (bottom, or a**e) and 'cou' (neck) - the sound difference is hard at first. It can result in some very awkward conversations, like telling your in laws "J'ai très mal au cul aujourd'hui" (I have a very painful a*** today).” - Charlotte

“Speaking French in Quebec, I mispronounced 'queue' (queue) as 'cul' (arse) when explaining I was waiting in line outside” - James

“In Spain, someone asked me how I was. I said I was 'muy casado' (very married) instead of 'muy cansado' (very tired).” - James

“At school, our French teacher always warned us of the false friend 'preservatif' (condom). He discovered this when he was having a conversation about bread. He wanted to say that there are more preservatives in British bread, which is why it's not as good. He took a guess at the word and it didn't turn out well” - Hannah

“In Spain, a male friend fell for the classic 'estoy embarazado' (I'm pregnant) false friend when meaning to say he was embarrassed (which obviously then increased his embarrassment).” - James

“In Hungarian we say puszi (pronounced like pussy) for kisses, which makes every English person I know laugh.” - Rita

3. Asking a little too much in a new rental

2. Getting kicked out of a cathedral

“Outside of a cathedral in France, I accidentally referred to the 'Verge Marie' (Penis Mary) instead of the 'Vierge Marie' (Virgin Mary).” - James

“The verbs 'to write' and 'to piss' are the same in Russian, the stress is just in a different place. My teacher took great delight when I accidentally told him I was pissing rather than writing my homework.” - Hannah

If you've made a humiliating language mistake, we want to hear about it - if only to make ourselves feel better. Tweet us @euronewstravel or find us on Instagram @euronewstravel.