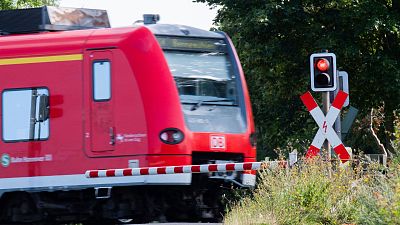 The €9 German rail pass will come to an end this week, after travellers purchased a mammoth 52 million tickets over three months.

The ultra-cheap pass offered passengers unlimited use of local and regional trains between June and August.

The offer comes to an end on Wednesday. But the Association of German Transport Companies (VDV) urged the government to introduce a replacement, claiming that travellers purchased 52 million tickets.

“If we take the transport transition and climate change seriously, we must act now,” said VDV CEO Oliver Wolff.

“The ticket has been very successful and it’s worth thinking about continuing it.”

The VDV estimate that around 1.8 million tons of CO2 were spared during the offer period - a reduction equivalent to planting 90 million trees.

What is the €9 German ticket and has it worked?

The €9 a month ticket offered passengers unlimited use of local and regional trains between June and August.

The heavily subsidised pass has been hugely popular. In addition to the individual ticket sales, 10 million people with existing transport passes had the difference between their usual price and the nine-euro ticket reimbursed.

According to weekly surveys of 6,000 public transport users by Deutsche Bahn and the Association of German Transport Companies (VDV), the passes have encouraged one in five people to switch to public transport for the first time. The researchers estimated that 10 per cent of the journeys made by train would otherwise have been taken by car.

Other surveys suggest that road transport has not dropped significantly.

A study by the Technical University of Munich showed that while 35 per cent of the 1,000 study participants took the bus and train more often, just three per cent used their own vehicle less often.

Nonetheless, study leader Klaus Bogenberger said that this could increase over time.

​​“A radical change in every day behaviour due to a new offer was not to be expected. This makes the percentage of people trying alternative modes of transport to their own car all the more important,” he said.

“The important result is that many have integrated public transport into their everyday lives.”

“The important result is that many have integrated public transport into their everyday lives.”

Klaus Bogenberger
Researcher at the Technical University of Munich

Will the government introduce a replacement for the €9 rail pass?

The experiment has cost roughly €2.5bn in state subsidies, and the German government has so far ruled out extending it further. But other suggestions being debated include a yearly €365 ticket or a phone-plan style offer where passengers buy a monthly kilometre budget.

Other countries have also offered subsidised train travel. In Spain, the government has announced that all commuter trains (Cercanías and Rodalies) and mid-distance regional lines covering journeys of less than 300km (Media Distancia routes) run by the national rail operator Renfe will be free from 1 September to 31 December