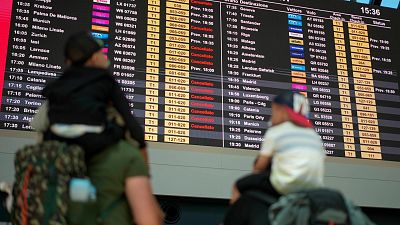 Staff shortages, strikes and general transport chaos are forcing more airlines to cancel flights this winter. Thousands of passengers across Europe are likely to be affected.

Lufthansa confirmed today that it will be removing some flights from its winter schedule from now until 26 March 2023. So far the airline hasn’t confirmed how many will be cancelled but says it is due to staff shortages, particularly at Frankfurt Airport. Lufthansa may also make some changes to flight times from October.

British Airways (BA) has announced that it was scrapping more than 1,000 flights before 29 October due to an extension of the passenger cap at Heathrow Airport. The cap was introduced in July, limiting the number of people travelling each day to 100,000 in a bid to prevent last minute cancellations.

A further 10,000 flights are also being axed from the BA’s schedule between 29 October and March next year. It amounts to around 8 per cent of the airline’s schedule during this time period.

SAS Scandinavian Airlines has cancelled 1,600 flights from its September and October schedule. The carrier says it is a knock-on effect of the two week pilot strike in July and a delay in aircraft deliveries.

Low cost Hungarian airline Wizz Air is scrapping almost all of its flights from Cardiff Airport, Wales from September for more than six months. This includes services to popular European holiday destinations like Alicante, Corfu and Lanzarote as well as some further afield.

Just two destinations will still see services from Cardiff Airport - Milan and Bucharest. Wizz Air says “economic pressures” were behind the decision to cancel the flights.

In the US, airlines are also trimming their schedules this winter.

American Airlines plans to cut more than 29,000 flights in November in an effort to reduce disruption and avoid travel chaos. The frequency of some regular routes is being reduced while others are being completely axed.

US airline Delta is also cutting more than 4,000 November flights due to staff shortages caused by an unexpected number of workers calling in sick.

Ryanair is adding millions of flights to its winter schedule

These flight cancellations come despite the growing number of people looking to travel post-pandemic. High demand and a lack of staff to deal with the sheer number of passengers is what led to many of the delays, cancellations and queues the industry has seen this summer.

But one airline is capitalising on the cancellations by increasing its number of flights. Ryanair has just added more than a million seats to its winter schedule in the UK.

“While BA are cancelling eight per cent of their winter schedule due to staff shortages and ‘Hopeless Heathrow’s’ capacity restrictions, Ryanair is now adding more capacity to our largest ever winter schedule,” CEO Michael O’Leary said in a statement.

The budget airline is adding services to and from 20 UK airports including Manchester, Gatwick and Stansted. Ryanair says the target for its total number of passengers this year has grown from 165 million to 166.5 million.