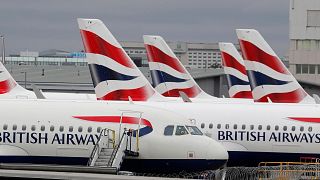 British Airways (BA) has cancelled more than 10,000 flights to and from London's Heathrow Airport in the coming months.

Heathrow cut staff numbers during the pandemic and has struggled to cope with rising passenger numbers after most COVID-19 restrictions were removed. It has also had issues with its baggage handling system leading to long delays on luggage.

The airport, which is BA’s main hub, announced last week that it will be extending its daily cap of 100,000 passengers until 29 October. This was introduced to try and cope with staff shortages and reduce the number of flights being cancelled at the last minute.

A dozen round trips a day - a total of 1,258 flights - are being pulled before 29 October to comply with the extension of the cap.

An additional 10,000 flights have been axed between the end of October and March next year. The majority of the trips are to European tourist hotspots which are less popular with passengers during the winter.

A spokesperson for the airline said it was “protecting key holiday destinations over half term” and that a vast majority of passengers will travel as planned.

BA added that it was giving customers travelling this winter advance notice of changes to its flight schedule. Short haul destinations with multiple flights a day will see less services, resulting in an 8 per cent reduction to the airline’s schedule.

“We'll be offering customers affected by any of these changes an alternative flight with British Airways or another airline, or the option of a refund,” the airline said, adding that passengers were being given several months' notice of the changes.

Gatwick removes its cap on capacity

In contrast, Gatwick - the UK’s second largest airport - has just announced that it will not be continuing its summer capacity cap beyond the end of this month.

Chief executive officer of the airport Stewart Wingate said that unprecedented growth in traffic had led to operational issues in June. “Decisive early action” to introduce a capacity limit, however, has ensured passengers have experienced reliable flight timetables this summer.

We are now very much operating business as usual and do not see any reason to extend the capacity declaration.

“We are now very much operating business as usual and do not see any reason to extend the capacity declaration,” he added.

The airport revealed that strong demand from passengers has helped to accelerate its recovery from the effects of the pandemic. More than 400 new security staff have been recruited to help deal with delays. Gatwick has also loaned staff including baggage handlers to other airport operators struggling to cope with an influx of passengers.

With 40 new long haul routes to destinations including New York, Hanoi and Boston, the airport is reporting “cautious optimism” for the rest of the year.