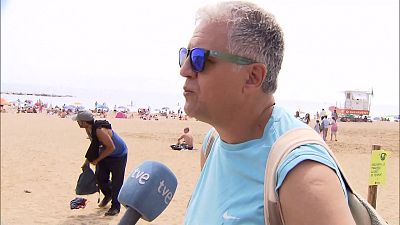 As well as its unique architecture and lively nightlife, Barcelona has become world famous for its pick pockets and bag thieves.

In the latest instalment of crimes against tourists, a bag thief accidentally went about his business in front of a TV camera. And was later caught by police after the TV footage was reviewed.

In May, Barcelona authorities unveiled a new plan to tackle crime over the summer, as the number of tourists - and petty crimes - returned to pre-pandemic levels.

Under ‘Operation Summer,’ the city council announced there will be 12 per cent more police officers on the busiest streets than last year, and tougher sentences against repeat robbers. But is it working?

How bad is crime in Barcelona?

The Catalonian capital is notoriously rife with pickpockets. In 2018 there were an average of 12 robberies an hour, according to Spain’s interior ministry. The large drop-off in street robberies in 2021 - plummeting by 56 per cent compared to 2019 - suggests the ebb in tourists was a big contributor.

Now, as visitors are once again filling the shadowy lanes of the Gothic Quarter, light-fingered criminals are back too.

According to police figures, between January and the end of May this year there were 34,000 thefts reported in the city, around 225 per day. So not quite the 12 per hour of 2018, but not far off, averaging just over nine per hour.

Furthermore, over the course of a single weekend from 20-21 May, more than 80 people were arrested, largely for theft, according to local media reports.

And that's before the big summer season hit.

Duty lawyers at Barcelona's ‘Ciutat de la Justicia’ law courts have likened the influx to the worst figures of 2019, Crónica Global reports, even before the peak tourist season.

In a bid to combat another crime wave, deputy mayor and head of security, Albert Batlle, announced in May a seven-pronged plan to make Barcelona safer.

“We don’t want to spend this summer as though it’s a hopeless fate that we have to submit ourselves to, like one of the plagues of Egypt,” he told the press conference.

The first line of action is to prevent theft and crack down on repeat offenders, who were previously only fined the same small amount for stealing goods worth less than €400.

More public security patrols, undertaken by both uniformed and plain-clothed police officers, are being carried out in areas “where there is a large concentration of night-life individuals and establishments,” a City Council spokesperson tells Euronews Travel.

The security plan will focus on hotspots in the old city (Ciutat Vella), Eixample and the busiest tourist and commercial areas, as well as Barcelona’s beaches.

Tourists may also find themselves on the sharp end of tougher measures for drunk and disorderly behaviour - with special attention paid to incidents around tourist accommodation, the City Council adds.

How can tourists protect themselves in Barcelona?

As tourists have long been the target of thieves in Barcelona, the regional police force has shared some tips to help people stay on their guard.

They advise keeping belongings in your inner pockets, and wearing your bag in front of you - to avoid a two-pronged attack from a ‘staller’ and ‘picker.’ This is where one person might bump into you from the side or in front, leaving you exposed to the second thief behind who reaches into your pockets or bag.

Special care should be taken on public transport and with your phone at bars and restaurants.

There has been a recent trend of watch thefts and so the Mossos d’Esquadra adds that it’s worth concealing an expensive watch or other item of jewellery from prying eyes.

If you are caught in a mugging - or witness an offence - call the emergency police number on 112.

Watch the video above to see a Barcelona bag thief in action.