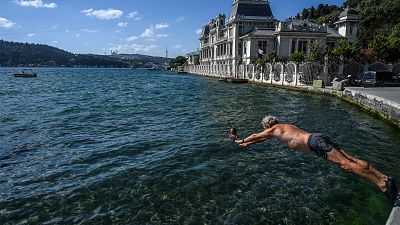 A swimmer dives into the water in the Bosphorus strait in Istanbul's Bebek district   -   Copyright  OZAN KOSE/AFP or licensors
By Hannah Brown  & Maxime Caron  with AFP  •  Updated: 12/08/2022

Istanbul is a favourite destination for many Europeans in search of incredible architecture and bustling bazaars.

So you might be surprised to learn that just outside of the city there’s a wealth of stunning beaches.

Istanbul has 85 accessible beaches or bathing spots, many of them no more than 30 or 40 minutes on the metro from the city centre. Due to the city’s unique location, you’ve also got the choice of swimming the Black Sea in the north, the Sea of Marmara in the south or the Bosphorus Strait in between.

Where can you swim in Istanbul?

Though Istanbul’s beaches have never been a secret to locals, visitors are starting to discover them too.

At Kadikoy beach on the Asian side of the city, Istanbul officials have added a hundred extra sun loungers, creating room for 300 people under 170 parasols to meet the demand.

"I have never seen such a crowd as there is this year, people have difficulty finding deck chairs,” explains Istanbul resident, Canan Civan.

There is a more unfortunate side to the spike in popularity. Turkey’s economic crisis that has seen consumer prices soar by 80 per cent in the past year, leaving many unable to travel.

But Canan says that even if she could afford it, she’d much rather stay and enjoy 3 months at these beaches than a 10-day holiday elsewhere.

Where are the best spots to swim in Istanbul?

It’s important to note that it’s forbidden to swim in the Bosphorus strait in central Istanbul due to the large number of boats. However, once a year there is a swimming race which is free to enter.

There are both public and private swimming spots, each attracting different clientele so it’s important to pick one that’s right for you.

Some, like those in Bakirkoy, attract a more traditional clientele who cover themselves for religious or cultural reasons, while at others, such as the beaches in Florya, bikinis are worn.

Like in Turkish society, the two often share the same space. At some beaches, covered and non-covered women occupy different parts of the seafront.

You may also find 'women only' beaches but don't expect to be able to rock up in your usual swimwear. Most people in these beaches are more likely to be wearing something a little more conservative, like a burkini.

In the Sile neighbourhood, the Black Sea meets the northern edge of the Bosphorus Strait, the stretch of water dividing Turkey into its European and Asian halves.

Sile is known for its long and wide sandy beaches. Akcakese Akkaya is particularly popular for its clean water.

Sile is also known for Turkey’s largest and the world’s second largest lighthouse.

Local estate agent Eren Bizmi likes to hang out on Sile’s beaches and says the Black Sea beaches are the best for swimmers because the water is "less salty" than the Sea of Marmara.

However, the two Russian sea mines have washed up in this area this year - a haunting reminder of the war happening on the other side of the Black Sea.

On the Sea of Marmara, Florya Sun Beach is a great option as it’s easy to reach from central Istanbul. The beach stretches 800 metres and is considered one of Istanbul’s most beautiful swimming spots.

If you fancy a boat trip, you could pay a visit to Princes’ Islands. Of the nine islands, there are four where you can swim - Buyukada, Heybeliada, Burgazada and Kinaliada. Ferries depart regularly from the city centre to the islands and a round trip is included if you have the Istanbul E-pass.

“It is a privilege to swim in Istanbul”

"I think it is a privilege to swim in Istanbul. Because you enter the sea between two continents. From here, when I am in the water, I look towards Europe and opposite towards Asia. This does not exist anywhere else in the world,” he explains.

The water around Istanbul is a delightful 23°C in summer and drops to around 11°C in winter. Though that might sound chilly, it doesn’t put Eren off from coming for a swim every day.

Watch the video above to learn more about swimming in Istanbul.