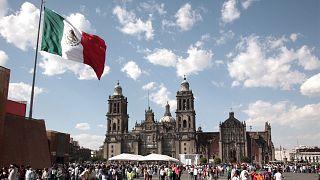 With its buzzing nightlife, delicious food and relaxed visa rules, Mexico City has become a hub for digital nomads and tourists.

But as rents and cost-of-living skyrocket, some locals are urging would-be remote workers to stay away.

“Housing yes! Evictions No!” the protestors urged. “Mexicano wake up, they are going to raise your rent!”

Anger is mounting as visitor numbers rocket. According to the popular remote worker website Nomad List, Mexico City is the fifth fastest growing remote work hub in the world.

The ranking is based on the number of subscribers who check in from Mexico City - a figure that grew 125 per cent in 2021.

Such visitors are “displacing” locals from the city centre, carnival organisers warned.

Why is Mexico City so popular with digital nomads?

Every year, millions of tourists descend upon the Mexican capital. In 2019, the number of international visitors in the city’s hotels exceeded 3.5 million.

Thanks to relaxed visa rules, many decide to stick around. Mexico allows citizens of more than 70 countries to stay up to six months without a visa. To renew the visa-free period, all visitors need to do is briefly exit the country.

After the onset of the COVID-19 pandemic, it was one of the only places to remain largely open to unvaccinated tourists. Since March, all COVID-related travel restrictions have been dropped.

The price also draws in visitors. In a 2022 cost of living index by global database Numbeo, Mexico City ranks 378th out of 510 cities, with prices significantly lower than any US city.

Affluent foreigners - mostly from America - might be able to scrape together the rent for a studio in their home cities. In Mexico City, they can live in luxury.

For locals, it’s another story.

According to an Autonomous University of Mexico (UNAM) study, nearly a third of Mexico City residents had to move homes during the pandemic. Most cited unaffordable rent as a contributing factor.

The number of judicially permitted evictions in Mexico City increased by around 27 per cent between 2020 and 2021, local news source El Sol de México reports. This dire figure doesn’t include informal rent contracts, the arrangement favoured by most Mexico City tenants.

“Those who are too quick to celebrate the benefits of remote working should be more sensitive to the nuanced impacts of WFH on minorities and gentrification,” said Antonio M Bento, Professor of Public Policy and Economics at the University of Southern California.

How do locals feel about the influx of visitors?

Some Mexico City locals welcome the influx of outside visitors, who stimulate the local economy by splashing their high levels of disposable income. Between January and April this year, international visitors spent 851 million USD on hotels alone, according to tourism records.

But others warn that overtourism is destroying the city’s culture.

“It is said that a long long, time ago (before Airbnb) there was real life in this building,” reads one ‘Observatorio Vecinal del Centro Histórico’ poster, a tongue in cheek reference to the city’s homestay boom.

“Do they already charge rent in dollars here too?”

What can be done to help Mexico City locals?

However, many activists do not hold individual digital nomads responsible. Rather, they call for stricter rules protecting tenants against evictions.

“(The real problem is not) the fact that ‘people arrive from outside’” tweeted activist Carla Escoffié.

“The problem is the lack of tenancy legislation, tenant impunity, the lack of contracts and the fact that groups with purchasing power are privileged.”

Other expats are trying to respect the feelings of locals. In 2019, a group of expatriates and locals started The Good Guest Collective.

“We’re a group of friends (both foreign and local to CDMX)… trying to help visitors be better guests,” the collective’s mission statement reads.

“It’s normal to arrive to a new country and not know the local norms most important to the communities that live there.

“Our goal is to help inform guests of these norms so that they know of some ways to be respectful while visiting CDMX.”

Local businesses are being forced out to make space for apartments

But despite these efforts, the human impact of the digital nomad influx is undeniable.

In February, a local family were forcibly evicted from the Torta sandwich business that they had run for 54 years.

The business site - in the centre of the popular Roma neighbourhood - is now being developed into apartments.

“Fifty-four years of our life in that place, and that was the end of it,” Noemí Ortíz told Mexico News Daily.

“We can’t go and set up in Roma again; we cannot afford to rent anywhere there,” she said.

“We do not know what we will do. There are very few jobs for older people [like us].”