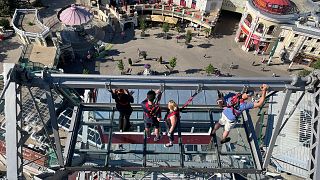 When my husband asked me to go on Vienna’s famous Ferris wheel for about the 30th time just before Christmas 2015, I wasn’t expecting anything out of the ordinary. I definitely wasn’t expecting to get engaged. Fast forward six-and-a-half years and I find myself here again, my left hand - complete with wedding ring - firmly clamped on his arm as we make the same journey again, but this time with a bit of a difference.

Instead of admiring the view over the city from the safety of one of its 15 carriages, we were standing on a clear glass platform suspended between two of them, all while strapped to a metal bar some 67 metres off the ground. “Look at your feet,” said our chaperone Shivi. “No,” I somewhat snappily respond.

What is the Wiener Riesenrad?

The Wiener Riesenrad - to give it its full title - has temporarily installed ‘Platform 9’ to celebrate its 125th birthday. Suspended between carriages 8 and 10, the glass platform fills a gap left where every second carriage was removed after suffering damage during World War II.

By sheer coincidence, carriage 10 was also the one we were standing in when my husband proposed - something seemingly unacknowledged by the other passengers at the time, despite my other half going down on one knee. If they had noticed, perhaps we’d have a better photo than a slightly blurry selfie hastily snapped as our ride ended.

The Riesenrad has long been a symbol of Vienna

Built in 1897 to celebrate the Golden Jubilee of Franz Joseph, the Riesenrad has long been a symbol of the Austrian capital. It was nearly demolished in 1916, but was spared due to a lack of funds. It burned down in 1944 and was rebuilt just three years later, together with other Viennese landmarks the Stephansdom, the Staatsoper and the Burgtheater, such was its symbolic value to the postwar city.

The Ferris wheel has been spinning ever since, only stopping for the first time in 73 years due to COVID. Just as after the war, it was ceremoniously reopened by Viennese mayor Michael Ludwig as a symbol of Vienna’s post-pandemic recovery. It remains the oldest operating Ferris wheel in the world.

Film buffs may recognise it from the likes of 1980s James Bond movie ‘The Living Daylights’ or 1990s classic ‘Before Sunrise’. But its most famous cinematic link is with British film noir classic ‘The Third Man’, starring Orson Welles and set amid the corruption of post-war Vienna.

Beyond my engagement, the Riesenrad has something of a personal link for me too. I grew up as a Brit in Vienna and spent many summers counting out my coins to go on the rides of the surrounding Prater funfair - many of which haven’t changed.

But by the time I returned to the UK as a student in the late 1990s, I’d been on the Riesenrad a grand total of half a dozen times, if that. Then I met the man who ended up being my husband, and he has insisted on us taking at least one spin on every visit to the city since.

How the Riesenrad became a symbol of my own

At last count, we reckon he has dragged me on it about 50 times and it’s become something of a running joke. Our wedding ‘save the date’ cards featured a photo of us in front of it and my hen do started on it.

When we got married in the vineyards overlooking Vienna in the summer of 2017, the Riesenrad stood in the distance. A day later, we even got several dozen of our wedding guests on it, spread across two carriages, with me getting a free ticket due to playing ‘teacher.’

So when we find out the Riesenrad is running Platform 9, it seems like a no-brainer for us to check it out. After booking online, we turn up at the ticket office as we have done dozens of times before. But instead of standing in the regular queue we are taken around the back to sign a form confirming, among other things, that we don’t have a fear of heights. Along with chaperone Shivi, we are then securely harnessed up before being led to the front of the queue to wait for Platform 9 to arrive.

It soon becomes obvious that we’ve become part of the attraction ourselves - with tourists gawping as we step on to what looks like a gap between two regular carriages. If you’re going to chicken out, now’s the time, as the wheel can only reverse so far.

Then off we spin. The Riesenrad is far from speedy - a full rotation lasts around 10-to-15 minutes - but my biggest challenge is turning around to face outwards, as I feel more secure when I can see the structure we’re attached to.

Riding Platform 9 is like standing on air above the city

Though my legs still feel like jelly, the exhilaration of feeling like I’m standing on air soon makes it worthwhile. A familiar view becomes that little bit different with the wind blowing in your face and seemingly nothing beneath your feet.

This being the smartphone era, you’re allowed to take your mobile with you in a special bag hanging around your neck - plus the chaperone is happy to act as photographer. The photos we have from the top certainly make up for our slightly disappointing post-engagement selfie.

But perhaps the most surreal bit of the ride is actually going down, when you watch the people milling around like dots in the busy piazza below as you slowly rotate back to where you started. Hidden between two carriages, it’s almost like they can’t see you.

The Riesenrad has long been a piece of Vienna’s history. As we come to the bottom, and the adrenaline settles, it occurs to me that we’ve just written another chapter of our own history, too.

The Wiener Riesenrad’s Platform 9 ride runs every Saturday and Sunday until 30 October and costs €89 per person. Book online here.

Spain, Italy, Portugal: Which is the best European country for expats?