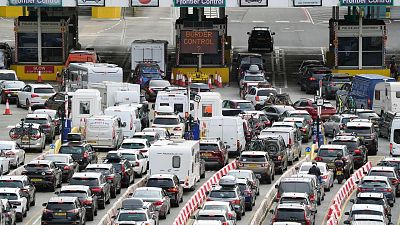 Car queue at the check-in at Dover Port as many families embark on getaways at the start of summer holidays for many schools in England and Wales.   -   Copyright  Gareth Fuller/PA via AP   -
By Jack Pole  with APTN  •  Updated: 22/07/2022

Britons heading off on holiday by ferry faced hours-long waits at the port of Dover on Friday, with authorities blaming French officials for the chaos.

Dover authorities said a lack of French border officials was leading to waits of up to six hours for border checks at the English Channel port, with queues of tourist and freight traffic snarling roads for miles kilometres.

Port authorities said in a statement that the number of French border police “has been insufficient and has fallen far short of what is required to ensure a smooth first weekend of the peak summer getaway period.”

We’ve been badly let down this morning by the French border.

“We’ve been badly let down this morning by the French border," he said.

He urged travellers to “consider holding off heading for the port at this point in time until more is known."

Ferry operator P&O said “there are currently queues in excess of four hours to reach the border controls” at Dover. It urged travellers to “arrive prepared for a prolonged wait. Carry snacks and additional water with you.”

Travel chaos in the UK

Millions of people in Britain trying to start vacations this weekend — the start of the summer holidays for most schools — face the threat of disruption by road, sea, rail and air.

Air travel has also been hit, in Britain and around the world, as airlines and airports struggle to cope with the return of mass travel following two years of pandemic disruption.