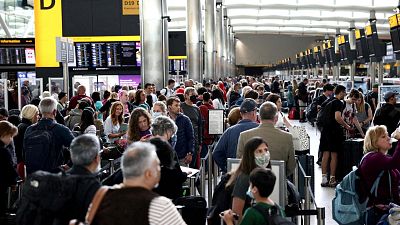 Europe is in the midst of an unprecedented heatwave with temperatures soaring across the continent.

Extreme temperatures have suffocated Spain and Portugal with similarly hot weather set to grip the UK and France this week.

At least 360 people have died in Spain since 10 July and 659 in Portugal where thermometers reached 46 degrees Celsius.

In the UK, experts are predicting the hottest day on record this week as temperatures are set to soar to 41 degrees Celsius. France has also extended a red heatwave alert to more than a dozen regions warning of “hazardous conditions of exceptional intensity.”

And, as people look to escape the heat by flying abroad, ongoing airport chaos has left some travellers suffering from the heat while waiting for their flights.

How is the heat disrupting passengers on flights across Europe?

At Gatwick Airport in the UK, people were reportedly “passing out” due to heat after being left to queue at their gate “without air conditioning” on Saturday.

One traveller tweeted that it was “total chaos” at Gatwick Airport claiming temperatures had reached 26 degrees Celsius inside. Others said it was “boiling” inside the terminal with passengers feeling “unwell” due to the heat.

Total chaos @Gatwick_Airport 26 degrees inside people are passing out! Sort it out at gate 52 before people are hospitalized!

Another traveller reported being trapped in a stairwell at their departure gate. EasyJet passenger Debbie Shipley tweeted “I would like to know if it's okay to lock 40 people in a stairwell? We’re still here after we were meant to go at 5:55 am.”

Good work @easyJet@Gatwick_Airport 2 hour delay to finally get moving all the way to be locked into a…. Staircase with no plane or bus in sight. pic.twitter.com/GGSdyoo99N

Twitter users said the group had been stuck there for two hours. The airport has apologised for the delays and inconvenience caused to customers over the weekend saying staff shortages were to blame.

It comes after passengers were left without full running water and only two functional toilets on 14 July when a water main burst near the airport.

During the extreme heat in France last week, passengers at Toulouse Blagnac Airport forced their way onto a flight to Marrakech.

Due to depart on Wednesday evening (13 July), they were reportedly left to wait in “stifling heat” without food or water until they learned their flight was cancelled, according to French newspaper La Dépêche.

The exhausted passengers invaded the aircraft and refused to leave. A witness to the event said the situation wasn’t resolved until around 7:30 am the next morning. A flight to Marrakech finally departed Toulouse at 11 am.

Here we go, time to join the Schiphol queue. ? pic.twitter.com/j4GSXNWOdr

Travellers have also been left to queue in the heat today at Schiphol Airport in the Netherlands. Lines stretched outside of the terminal building with the wait to pass through security reportedly between two and three hours.

Staff have been handing out water and ice creams to those lining up in the hot weather. Fans and tents have also been erected outside to try and keep people cool in the queues.

How do you stay safe at the airport during a heatwave?

Gatwick Airport’s website refers people to UK government advice on the red weather warning in place on 18 and 19 July.

Passengers travelling through the airport are being told to bring empty water bottles through security to fill up at water fountains in the departure lounge.

In response to the recent airport chaos, Heathrow is advising passengers to arrive no more than 3 hours before their flight. Travellers are also being reminded to check what they can and can’t bring in their hand luggage in order to keep queues at security moving.

For those looking to get to London’s airports via public transport, many rail services have been amended with Transport for London advising passengers only to travel if their journey is essential. Timetables are reduced with fewer services running during the heatwave - including the Gatwick Express.

On Monday 18 and Tuesday 19 July, @networkrail is expecting disruption to train services due to extreme temperatures. Timetables will be reduced, with fewer services running.

If you have to travel, passengers are being advised to check their journeys in advance before setting out.

With temperatures high in the Netherlands, Schiphol Airport has also shared some advice for passengers waiting in queues. Travellers are being told to bring enough water for themselves and their families, wear light clothing and apply sunscreen if they have to wait outside the terminal.

The airport is monitoring temperatures and attempting to stop lines from forming outside wherever possible.

Airport etiquette: 10 ways you can be a more considerate traveller