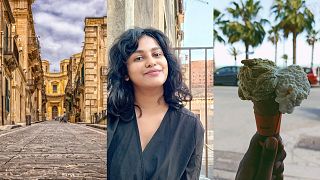 I stretched out as gracefully as I could, wincing at my tight hamstrings. I was in a large, airy room with floor-to-ceiling windows, lying alongside about a dozen other people.

Some were experienced yogis, while I felt like I was dusting down the cobwebs from my joints. But everyone was smiling, and there was a happy, light-hearted atmosphere in the room.

The perfect combination of yin yoga and Sicilian dinners

The day before, I'd taken a ferry from Malta, where I live and work as a digital nomad, over to the south-east tip of Sicily. Lots of people I met didn’t know how close Malta is to the Sicilian island, but it was just 1.5 hours by boat. It was my first time in Sicily, ending up here after winning Euronews Travel’s competition to stay at an all-female co-living house.

But before heading there, I decided to make a pitstop at Floripa Yoga & Kitesurf House for a few days of rest and relaxation. Luckily the ferry stop was only ten minutes away and I was picked up by Floripa’s manager Giada, whose sprightly energy managed to infuse some life into my sleep-deprived being.

Over the course of the next few days, I dove into Floripa’s delightful atmosphere like a desert-dweller drinking spring water. I cycled through countryside roads lined with lush greenery, indulged in the most incredible gelato, learned how to make a traditional Sicilian meal from scratch, and ended the day with yin yoga - the perfect way to work up an appetite for a scrumptious dinner.

‘Floripa was designed to encourage strangers to become friends’

I had felt a little nervous about what travelling in Sicily as a solo female would be like. But everything about Floripa felt designed to encourage strangers to become friends.

When everyone sits at one long dining table, it's impossible not to get chatting and find out what you have in common. Especially when you’ve just come out of a refreshing yoga class together. From the sighs of loosening muscles to the tinkling of bells and the deep hums of the primordial sound, ‘Aum’, the evening yin yoga sessions were not only a holistic experience but also a great dinner conversation starter.

We shared big plates of courgette marinated in mint and lime juice, and spicy battered tofu with a tangy sauce on the side.

When it was time to leave a couple of days later, my muscles felt looser than when I’d arrived. It’s hard not to feel a certain ease when there’s sun on your face, a sea breeze in your hair, food from the earth in your belly, and happy people by your side.

Catania is in the shadow of Europe’s largest active volcano, Mount Etna

My next stop was Catania, the second largest city in Sicily. Built more than 9,000 years ago, Catania is known as ‘the black city.’ This is thanks to Mount Etna, Europe’s largest and most active volcano, colouring buildings with its soot and ash.

I was eager to visit its magnificent Baroque palaces and churches, many of which were erected after the 1669 eruption in the city centre and have been designated as UNESCO World Heritage Sites.

While in Catania, I stayed at Cummari, a co-living space for solo female travellers. It's not a hotel or even a hostel, but a more of 'hometel,' which seeks to give you home comforts while you're on the road.

The space is so tastefully designed, from the deep turquoise lobby with gold accents (which gave me luxe speakeasy vibes) to the large and airy rooms with French-style windows that let golden hour light filter through the soft white curtains.

The house itself is a piece of history; built in the 1800s, it is a historic Sicilian home that used to belong to four sisters. Miche, Cummari's founder, travelled the world as a digital nomad for many years before settling down in Sicily. This means she has a way of intuiting what her guests need.

Whether it’s the things we all forget like a notepad and pen on the desk, or the things we didn’t know we needed, like a sense of community. Cummari means ‘friends who become like family’ and that’s just how I felt about my fellow guests.

During my stay, I wandered through Catania's historic streets, stumbling upon summertime festivals, sampling delicious street food (the pistachio croissants were my favourite), got a massage, and enjoyed endless glasses of wine (grown in Mt. Etna’s rich soils) and conversation with the other guests.

I was also meant to hike up Mt Etna and see fresh lava from a recent eruption, but an injury kept me at sea level. But as with so many things we have to miss out on when travelling, it just gives me an excuse to go back.

Four days in Catania flew by and it was now time for me to move on. As I was packing, I reflected on all the small touches that made Cummari so special, from the location being kept hidden so guests feel safe to the fuzzy bathrobe that made me feel like a million bucks after my massage, it all felt very well-considered.

I headed to the railway station deeply appreciative of the experience, making a quick stop for a white chocolate croissant and lemonade before boarding the train to Noto.

Noto: Culture, art and wine in one beautiful package

Noto is a charming town in south-eastern Sicily, known for its exquisite early 18th-century buildings, widely regarded as some of the greatest specimens of Sicilian Baroque architecture. I had come here for the ‘Infiorata di Noto’, an annual festival where fresh flowers are used to create magnificent murals on the streets.

As we pulled into the one platform station, Noto seemed like an entirely separate universe from Catania. Although the rest of the town seemed to be empty, the historic centre was busy with tourists and locals. In preparation for the flower festival, the main street had been cordoned off and schoolchildren were laying down dirt - creating ‘canvases’ for the murals made of flowers.

I had a train home to catch in a few hours, so I was torn between leaving early so I didn't miss it and staying long enough to see the final flower arrangements. It reminded me of the odd Sicilian term 'Annacarsi,' which means to hurry up and hang around at the same time. It's an intriguing phenomenon that, to me, suggests we need to keep going ahead while simultaneously pausing to look around.

So, as I waited for the murals to take shape, I sat in a wine bar and gazed about, soaking in all the colours, feeling incredibly grateful for this Sicilian adventure before the time came for me to hit the road again.