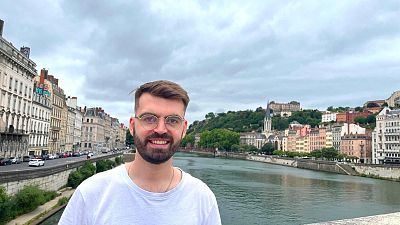 If you’ve ever been to France you’ll know that it is one of the friendliest, most open and welcoming countries in the world, especially for people who only speak English and not a word of the French language.

Ah, I almost wrote that with a straight face.

OK, this might be a bit of a stretch. In fact, it’s a blatant lie.

If you are looking to be humbled or have a slight degradation kink then moving to France without speaking the language is for you.

As an Irishman with one of the above (I’ll let you guess which) I decided that France was pour moi and off I went at the age of 20.

Now to be fair, I had studied French at school and I received an A in my final exams. But I became a living indictment of the Irish school system as after six years of French lessons, I could not string together a sentence in the language unless it was pre-written and memorised by heart.

Working in a ‘bilingual’ call centre and settling in

Naturally I decided that speaking French makes me uncomfortable (and I quite like being comfortable) and so I simply avoided it at every opportunity.

I know, groundbreaking stuff, and yet something that I, and many other English-speaking immigrants, can put on the backburner when they arrive in France.

After spending eight months avoiding speaking the language, I took a job in a call centre that was looking for bilingual phone operators.

As I was not bilingual, this was somewhat of a struggle.

Luckily, the phones would tell us if a call was coming from within France. When one would flash up on my screen I’d get a moment of hot panic before ‘accidentally’ hanging up.

If you are looking to be humbled or have a slight degradation kink then moving to France without speaking the language is for you.

While I was maybe not picking up the lingo, I was clearly becoming quite French by being bad at customer service - and simply not doing something at work if I didn’t feel like it (alright this might be an unfair generalisation, but you get my gist).

This (sort of) leads me to tip number two. Find a job where English is needed but you still have the opportunity to speak French.

I suppose the ideal advice here would be to throw yourself head first into a fully French-speaking job with no opportunity to speak English. There is that annoying cohort of people who thrive in these situations. You ask them how they speak a foreign language so well and they’re like ‘oh I spent two weeks there when I was 15 and just picked it up’.

I am not one of those people and if I had done that I would have quit and moved home.

In my job I was surrounded by English and French and it slowly rubbed off on me, while still giving me the confidence to strike up a conversation - and if all else failed dipping back into English.

While I worked in a call centre, there are opportunities for English speakers anywhere from multinational companies to Irish pubs. It will help you improve your French while still being able to enjoy yourself, and then once you have improved other opportunities will start to open up.

Not speaking French would often put me in embarrassing situations

I already knew the importance of being able to speak French when I arrived, but one evening journey to a night shift at work really hammered that necessity home.

The office was located a few kilometres out of the city so I had to take a coach.

It’s a hot day, the bus is jam-packed and I’m listening to some music with my earphones in. The bus trundles along and makes its first stop where there are several people waiting - including an elderly woman.

The bus driver stands up at the front and makes an announcement. I pause my music but she’s shouting in French. I'm at the back and can’t understand a word, but figure it can’t be that important anyway.

After a couple of minutes waiting we went on our way. The next stop is mine and we’re approaching it so I press the stop button and this is when things start to go wrong.

A frisson of tension immediately ripples through the bus, the man next to me starts shaking his head and people are looking around.

The bus comes to a halt and I stand up to get off. Immediately 80 heads spin around to look at me.

At this point I am concerned but I’m right by the exit door and ready to hop off. Except the door remains very firmly shut.

The bus driver has stood up again and is looking directly at me, eyes ablaze. So off I go shuffling nervously down the aisle to reach the top of the bus. I am greeted by a barrage of very loud, very angry French.

Now, as is clear I am no expert in the French language, but I got the gist. That announcement I so happily ignored/couldn’t understand was the bus driver asking if anyone was getting off at the next stop so they could let one elderly passenger on. When no one responded the elderly woman was not allowed aboard and off we went until two minutes later I so innocently pressed the stop button.

Needless to say I avoided that bus for the rest of my time working there.

How I eventually learnt the language

Anyway, back to the tips. Another one I’d recommend is living with a French person. This way you are forced to speak the language unless you cower away in your room every day (yes, I did do this for several months).

Your flatmate is forced to put up with your terrible French and will probably want to help you improve simply to make their own life easier.

This has been crucial for my progress and there is a real sense of satisfaction when you can finally hold a half decent conversation fully in another language.

Always be direct and ask for what you want in France

It’s important to learn to be assertive and direct, especially when dealing with French bureaucracy. As that’s what's going to help you find a flat, a job and help you function in everyday life - it’s pretty crucial.

As an Irish person I have a deep instinct to not want to be a burden or a hassle. Many of my emails or queries used to start with something like “If it’s not too much trouble would you mind…”

This does not fly in France.

The bureaucratic machine will sense weakness and ignore you. You need to tell them what you want, not ask, and then follow up constantly until it gets done.

I’m not saying to be rude to anyone, but you have to be determined and blunt, leaving no ambiguity as to what you are looking for. They will then ask you for your birth certificate (you need your real one with you, not just a copy) and take about a year to give you what you needed anyway.

While moving to France can have its challenges, it is a great country to live in.

There’s beautiful cities, amazing food, a great quality of life and an abundance of culture. So if you’re thinking of taking the plunge, but are unsure because of your language skills, I say go for it.

You won’t regret it, or at the very least you’ll have some funny anecdotes of French people shouting at you on a bus that you can retell for years to come.