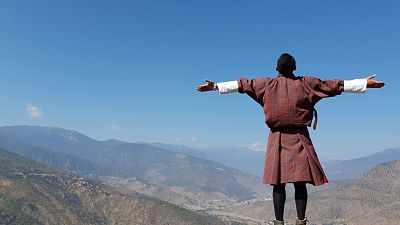 A common question about Bhutan is, where is it? Wedged between India and Tibet, this Himalayan kingdom has flown under the radar of mass tourism for decades.

That’s partly because Bhutan has a unique ethos towards tourism. When this isolated country finally opened to tourists in 1974, it adopted a ‘high value, low impact’ policy. It means there are strict controls on how visitors travel in Bhutan – including how much it costs.

Ruled by principles of Buddhism rather than business, Bhutan is a country that prioritises Gross National Happiness over Gross Domestic Product. And this idea filters down into every aspect of tourism.

To date, Bhutan is also the only carbon negative country in the world.

On 23 September this year, the country will finally reopen to tourists without quarantine for the first time in more than two years.

So what can other countries learn from the tourism model in this enigmatic, high-altitude nation?

The environment is king

Environmental conservation is one of the four pillars of Bhutan’s Gross National Happiness philosophy, recognising the importance of nature for its citizens’ wellbeing.

Landscape protection is written into the constitution. It is mandated that at least 60 per cent of Bhutan’s land must be covered in forest at all times – and WWF says Bhutan has consistently achieved this. At the moment, forest coverage is around 70 per cent.

Overall, more than 50 per cent of the country is protected. This is the largest percentage of any Asian country, according to WWF.

Between its high-altitude mountain peaks and alpine forest valleys, Bhutan has carved out a 5 million acre network of protected areas. Within these boundaries, native wildlife such as endangered royal Bengal tigers, snow leopards and elephants are thriving.

“The people of this Buddhist kingdom can hold on to a fundamental birthright: living out life in a healthy environment,” says WWF.

People are the heart of the kingdom

Instead of focusing on material development, the kingdom has a long-held belief that national development should be based on how happy and prosperous its people are. This also applies to tourism, which is designed to benefit local people.

The soon-to-open Trans Bhutan Trail is a good example of community-based tourism. This historic cross-country pilgrimage trail has been restored not just for tourists, but also to reconnect remote, rural communities.

The non-profit sustainable tourism enterprise behind the trail is also working in partnership with local schools, scout groups and Bhutan’s National Youth Service to provide education opportunities in areas such as flora and fauna, low-impact trekking, first aid and cultural history, for the communities along the path.

Tourist dollars are controlled and protected

Although pre-pandemic annual visitor numbers to Bhutan were on the rise, the country has never had more than 315,000 tourists a year. Compare this to its neighbour Nepal, a similar country in culture and topography, which received more than 1 million tourists in 2019.

There are no limits on tourist numbers, but Bhutan has deliberately set a high daily visitor fee to ensure it never receives more tourists than its population of 700,000 can handle.

The fee helps maintain an air of exclusivity, though if you look at the numbers closely it’s not actually that extortionate.

The tariff includes three meals a day; a licensed, English-speaking Bhutanese guide; all ground transport including a driver; a minimum of 3-star accommodation per night; entrance fees to tourist attractions; camping equipment and haulage for trekking tours; and a free local SIM card.

Setting pricing nationally in this way minimises tourism leakage – the term for when money is syphoned off to international companies and bank accounts. It ensures employment for locals. And the tariff also includes a $65 sustainable development fee, which helps the government provide free education and healthcare - and build infrastructure.

Personality is key to the culture

The Bhutanese see tourism as a cultural exchange. Rather than allowing an industry that dilutes local culture to satisfy foreign tastes, Bhutan has structured its tourism development to immerse foreigners in the country’s culture and traditions.

Bhutan is proud of its Buddhist history and tribal communities, and the tourism industry is engineered to open a fascinating window onto locals’ lives. Visitors are even encouraged to wear the kingdom’s traditional costumes, the gho and kira.

And it’s a country with its own unique quirks too. Bhutan’s king trekked through jungles and up mountains to oversee COVID measures during the pandemic.

Visitors can try archery, one of the national pastimes. And it is notorious for its phallic art, a custom that dates back centuries but is fully embraced by present-day Bhutan.

It is also the only country in the world without any traffic lights. Rumour has it that they were deemed too impersonal.

Even now, in the 21st century, the junctions of the capital Thimpu are manned by a police officer.