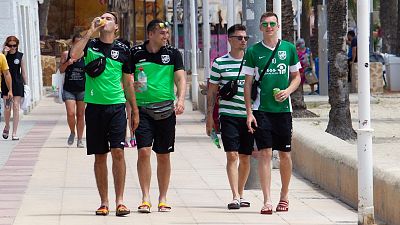 One of Majorca’s most popular party districts is banning people wearing football shirts from entering restaurants.

Despite the holiday season having only just started, Playa de Palma business owners are already fed up with drunken tourists. They’ve come together to create a dress code that visitors will have to follow or be refused entry to certain bars and restaurants.

The list of banned clothing includes swimsuits, football kits and any accessories purchased from street vendors like gold chains or umbrella hats. You can’t just remove your kit either as shirtless people will also be refused service.

Eleven restaurants in Playa de Palma, Spain are so far enforcing the ban, with QR codes at their entrances for people to check what they can and can’t wear.

While there will be some flexibility during the day, they say that there will be no tolerance at night when the bad behaviour is at its worst.

Since 2020, the Balearic Islands have been cracking down on drunken travellers with a number of measures to try and encourage more valuable visitors.

Balaeric Islands President Francina Armengol said that excess tourism is “not welcome” in the region.

“It is neither the kind of tourism we want nor what residents deserve,” she said earlier this year before the summer season began.

But business owners in Playa de Palma don’t believe that the Balearics’ efforts to limit drunken tourists are working.

Pedro Marín and Juan Miguel Ferrer, manager and chief executive of Playa de Palma, told local media that since 10 May, there have been large groups of tourists just looking to get drunk.

They don’t book much in advance, stay just a few nights and generally spend around €40 a day, “generally on alcohol and cans of beer that they consume, drinking on the street.”

The availability of alcohol in all-inclusive hotels may have been controlled, but the problem is out on the streets.

When the tourists arrive back at their hotel in the early hours of the morning, they are so drunk they can’t walk, the business owners say. Often they are left lying alone on the pavement.

“The availability of alcohol in all-inclusive hotels may have been controlled, but the problem is out on the streets,” they said.