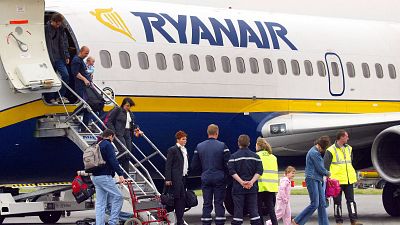 The Dublin-based airline has changed its policy requiring South African travellers to the UK to pass a quiz in Afrikaans after anger erupted earlier this month.

"Our team issued a test in Afrikaans of 12 simple questions," like naming the mountains outside the capital city Pretoria, CEO Michael O'Leary told a press conference in Brussels on Tuesday.

"They have no difficulty completing that. But we didn't think it was appropriate either," he added.

"So we have ended the Afrikaans test because it doesn't make any sense."

The South African government said it was taken aback by Ryanair’s controversial policy which required people to prove their nationality with an Afrikaans language test.

Afrikaans is used by just 12 per cent of the population and has long been identified with apartheid and the white minority.

Europe's largest airline by passenger numbers - which does not operate flights to and from South Africa - said it was asking those flying to the UK to fill in the "simple questionnaire" due to what it described as a high prevalence of fraudulent South African passports.

"If they are unable to complete this questionnaire, they will be refused travel and issued with a full refund," a spokesman for the Irish airline said.

Ryanair said it would apply to any South African passport holder flying to Britain from another part of Europe on the carrier.

How did South Africa respond to the Afrikaans quiz?

In response to the introduction of the quiz, the Department of Home Affairs said the local government had measures that it regularly shares with airlines to curb any instances of fake documents.

"We are taken aback by the decision of this airline because the Department regularly communicates with all airlines to update them on how to validate South African passports, including the look and feel," it said.

All airlines have access to the 'Advanced Passenger Processing' system which enables them to screen travellers before they depart and the government also runs a 24-hour service that airlines can use if they want to authenticate South African passports, the department added.

It is not clear to what extent the airline has used these services before resorting to this backward profiling system.

"It is not clear to what extent the airline has used these services before resorting to this backward profiling system."

“Given a higher prevalence of fake travel documents *globally* will Ryanair also be requiring Brits to complete a Latin test prior to boarding? No,” he added on Twitter.

Afrikaans is the third most spoken of 11 official languages in South Africa, used by 12 per cent of the 58 million people in the country. It was considered the official language until the end of apartheid in 1994.

The language was born of Dutch settlement in South Africa in the 17th century, and has long been identified with racial classification and associated with the ideology of apartheid which was primarily enforced and propagated by the white minority National Party from 1948.

Its dominance under apartheid was seen as a symbol of inequality imposed on previous generations by restrictions on where people could live, work, go to school and own land.