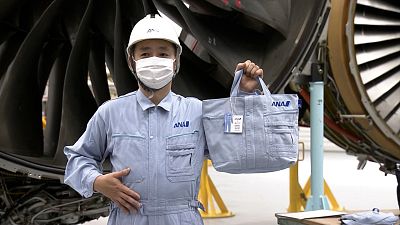 Like every industry, the aviation sector produces a lot of waste and it’s not just your average plastic packaging, personal products or discarded food.

Have you ever thought about what happens to an aeroplane at the end of its life or even staff uniforms?

We’ve taken a look at some ideas from across the world to reduce waste created by airlines.

Japanese airline All Nippon Airways (ANA) has produced a range of bags made from old staff uniforms.

ANA mechanics and maintenance crew wear light blue overalls made from a strong and highly-durable fabric and complete with multiple pockets - perfect for a bag.

Maintenance worker Takahashi Hideya came up with the idea to turn these unwanted clothes into something new.

"The airline industry is under severe scrutiny over environmental issues. I suggested this because, as an employee, I want to deal with the problem head-on," he explains.

As well as the overalls, ANA have begun recycling old life vests too.

The ANA maintain crew consists of around 3,000 people and the airline previously disposed of around 300 pieces of workwear every year.

And according to the Japanese Environment Ministry, only around one third of discarded clothes in Japan are recycled.

What happens to old aeroplanes?

In Ivory Coast, entrepreneur Aziz Alibhai has bought a collection of 11 old aeroplanes and has big plans for them.

"I would like to turn them into conference rooms, a restaurant and -- why not? -- luxury bedrooms," he says.

"We can modify them easily - the cabins have insulation and with a little air conditioning it could work very well."

Following the post-electoral crisis in Ivory Coast in 2010 and 2011 that killed some 3,000 people, the businessman set out to buy planes that had been left abandoned at Abidjan airport.

He now boasts a mixed collection of aircrafts including a former Soviet Union military cargo hauler and American and Dutch built passenger planes.

Alibhai has brought his planes to the site of his construction machinery rental company, located in Songon about 30 kilometres from Ivory Coast's economic capital, Abidjan.

The site also houses the facilities of Ivoire Academie, a third division football club of which Alibhai is the president.

Inside the football ground, spectators can watch the match from the comfort of old airline seats which have been stripped from the planes. Some first-class seats are being used on Alibhai's terrace, where he invites visitors to have a cocktail.

Eight of the aircrafts have been lined up on an 800-metre airstrip that leads to a lagoon. Alibhai envisages a terrace connecting the two giant sections, where visitors can relax and have a drink.

"We are very much recyclers," Alibhai laughs. He lists other structures made with salvaged objects in the buildings of his estate, such as sheds constructed with truck chassis and stairs made from bulldozer parts.

This isn’t the first time we’ve seen aeroplanes creatively recycled as in 2021, twin brothers Ata and Khamis al-Sairafi opened a restaurant in the West Bank inside an older Boeing 707. You can read more about that here.

Transforming an aeroplane into keyrings

German company Aviation tags takes the outer shell of old aeroplanes and chops them up into keyrings.

They have everything from classic planes to commercial jets and military planes. Each tag tells the story of the plane it came from. You’ll find out where your plane was built and when it took its first and last flight.

Plus each tag is registered so if you lose it, it’ll hopefully make its way back to you eventually.

Watch the video above to see ANA’s upcycling project in action.