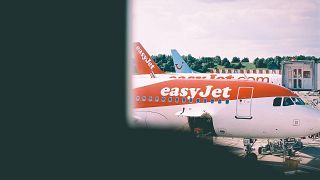 EasyJet has been forced to cancel hundreds of flights after experiencing IT problems.   -   Copyright  Elio Santos
By Rebecca Ann Hughes  & Charlotte Elton  •  Updated: 13/06/2022

Around 10,000 EasyJet passengers have had their flights cancelled today (13 June) after the airline axed 64 flights.

On Monday, the budget carrier canned 44 flights to and from Gatwick airport, its main base. Some passengers at Bristol, Luton, Glasgow, and Manchester have also had trips scrapped.

The news comes as the airline trims its June flight schedule with “pre-emptive cancellations” of roughly 40 flights per day for the rest of the month.

On Friday, chief operating officer, Peter Bellew sent a message to staff claiming the decision would “increase resilience across the network”.

“Making these cancellations is not something we take lightly but what’s worse is to cancel our customers’ plans on the day that they are ready to fly,” Mr Bellew said.

Today’s news come after a difficult few weeks for the air carrier, in which thousands of customers have been hit with last minute flight delays and cancellations.

Which EasyJet flights were cancelled?

On Monday, at least 64 flights were cancelled to and from UK airports including Gatwick, Stansted and Manchester.

Most of the cancellations were short haul flights to destinations in Europe, but Egypt-bound passengers at Manchester airport also had their flight scrapped.

The chaos looks set to continue for the rest of the month, with hundreds of flights pre-emptively cancelled.

One twitter user described the situation as an “absolute shambles,” while another accused the carrier of “ruining their holiday.”

The latest chaos comes after a horror few weeks for the budget carrier.

Over the Jubilee weekend, the airline cancelled dozens of flights - stranding would-be holidaymakers at the last minute.

On May 26, some 200 easyJet flights were cancelled to and from airports across the UK including Gatwick, Stansted, London and Manchester.

The issue was said to be an IT glitch that forced the airline to call off hundreds of flights departing throughout the afternoon. It also caused significant delays later in the day.

Many of the flights were reportedly cancelled at the last minute, even after boarding had been completed.

“Our flight to Gibraltar was cancelled yesterday after a full day of waiting and even boarding the flight,” one passenger wrote on Twitter. “All day we were told that our flight would be on until it got to 5:15 and we were told it was cancelled before the attendants.”

The company released a statement apologising for the disruption.

"We advise customers due to travel with us today to continue to check Flight Tracker to check the status of their flight before making their way to the airport,” the company added.

Can customers apply for compensation?

If your flight is delayed or cancelled by the airline, you are entitled to compensation. A passenger on a cancelled flight is entitled to a seat on the next available flight to your destination - even if it is with a rival carrier.

You are also entitled to accommodation, food and drink if you are stranded for an extended period of time. Airlines may require you to book your own accommodation and keep the receipts.

An EasyJet spokesperson indicated that passengers on cancelled June flights would be offered compensation.

“We are informing customers in advance to minimise the impact on their plans and provide the option to rebook before travelling or receive a refund," they said.

A series of problems at easyJet

The disruption this week comes as the aviation industry struggles to keep up with a spike in travel bookings following the removal of travel restrictions in most countries.

Is the aviation industry in crisis?

Easyjet is not the only airline to be dogged by problems in recent months.

British Airways announced last month that it had been forced to reduce its schedule by 10 per cent. Roughly 8,000 round trips have been scrapped between March and October.

Airports around the country have also seen chaotic scenes with lengthy queues and “mammoth” delays due to a lack of staff.

Outside of the UK, Schiphol airport in Amsterdam is also in turmoil. It has got so bad that Dutch Airline KLM has halted ticket sales for flights from the airport between now and Monday citing staff shortages.