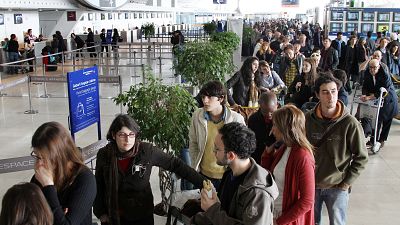 Paris-Charles de Gaulle airport has cancelled a quarter of Thursday morning flights this week, after staff announced a strike.

Unionised employees will walk off the job between 7am and 2pm on Thursday morning as part of a protest against low wages.

"We demand a 300 euro raise for all," the CGT union said in a statement, pointing to the rapidly rising cost of living.

To “limit traffic disruption,” the airport has cancelled 100 flights.

The news follows months of chaos for European travellers, with thousands of passengers enduring lengthy queues and last minute cancellations.

Faced with the sudden restart of air traffic in Europe after two years of virtual shutdown, many European airports are unable to manage a surge in passenger numbers.

Shortages of ground staff and security personnel have led to hundreds of cancellations at Amsterdam-Schiphol airport, Dublin airport and UK airports.

Nearly 200,000 European aviation workers were made redundant during the pandemic. Yet the European air traffic monitoring body forecasts that airline traffic will reach 95 per cent of 2019 levels this summer.

At Paris Charles de Gaulle airport, unionised workers claim that they are not paid enough to deal with this uptick in demand.

“Despite the resumption of traffic and profits, our work is not paid at its fair value… everything increases, except our pay,” an inter-union coalition in France announced.

"The chaos suffered for several weeks by employees working in France and Europe is intolerable.”

The airports desperately need maintenance technicians and baggage handlers to survive the demand.

They are also lacking border police to man screening inspection points. Currently, the airports are between 300 and 500 staff short of the 5,000 agents they require to function properly.

De Romanet promises to “fight like a lion” to improve conditions at French airports and to ease the “unbearable” conditions passengers face.

Tourists in Paris disappointed by under construction atmosphere