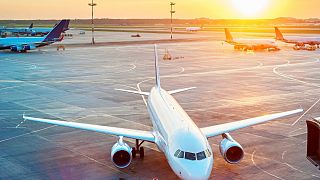 The aviation industry is responsible for more than 900 million tonnes of CO2 every year - offsets are not a solution.   -   Copyright  Canva
The opinions expressed in this article are those of the author and do not represent in any way the editorial position of Euronews.
By Sarah Faith  •  Updated: 02/06/2022

Book a flight and you’ll usually get the option to pay to offset your carbon emissions. In essence, your contribution funds tree planting and other projects intended to counterbalance the carbon you emit.

It’s a clever marketing ploy. But carbon offsets are a dangerous distraction from the need to reduce emissions.

While global aviation emissions almost halved during the pandemic, they are predicted to reach pre-pandemic levels by the end of this year. In fact, they’re on track to rise a further 25 per cent by 2030 - with disastrous consequences for nature and climate vulnerable communities.

Carbon offset schemes perpetuate the idea that the climate crisis shouldn’t stop aviation from increasing. They assuage climate guilt, while passing the problem onto someone else.

There are better ways to cut your holiday emissions. So, what should travellers do instead?

Limiting the number of flights you take is the simplest and most effective way to reduce your holiday carbon.

Data from the International Civil Aviation Organisation (ICAO) calculates that a return economy flight from London to New York emits an estimated 0.62 tonnes of CO2 per passenger. That’s 11 per cent per of the average Briton’s annual carbon footprint, and equivalent to the average Ghanaian’s total emissions a year. The more you fly, the heavier your footprint will weigh.

So fly less, and instead stay longer. You’ll enjoy a more relaxing holiday and an opportunity to explore your destination in more depth too.

Making the journey part of your holiday is a feasible option across much of Europe. Good connections link a multitude of popular holiday destinations. Taking the train from London to Madrid, for example, emits an estimated 174 per cent less CO2 than flying according to the Ecopassenger calculator.

Responsible Travel now offers over 160 flight-free holidays to Europe, while other tour operators such as Byway Travel, Exodus, and Cycling For Softies offer train travel as part of their tour packages too. Alternatively, The Man in Seat 61 is an excellent resource for independent travellers wanting to travel by train.

If an international flight is unavoidable, cut out other domestic flights if you can and explore your destination at a slower pace overland.

Human powered exploration is not only emission-free but often wonderfully unexpected and eventful. Walking, cycling, or kayaking gives a more intimate perspective to your holiday and can lead to memorable chance encounters with local people. Electric bikes can take the strain when lungs or legs can’t.

On the electric front, some safari lodges in places like Kruger National Park, South Africa or Ol Pejeta Reserve, Kenya, now have lower-emission electric safari vehicles available. These have the added benefit of being quieter and less disturbing for wildlife.

Watch your ‘foodprint’ on holiday

With 37 per cent of global greenhouse gases coming from food production, what you eat on holiday can significantly impact your total carbon footprint too.

Choosing to eat local limits how far your food travels before it hits your plate. Farmers markets and restaurants serving fresh, locally-sourced produce are a good place to start. As a bonus, this usually gives you the chance to try local delicacies and discover the dishes that make your destination sing.

If you want to go one step further, a plant-based diet can reduce your personal footprint by up to 73 per cent.

Major airlines including British Airways, Lufthansa and KLM have recently launched schemes which allow passengers to fund the use of sustainable aviation fuel (SAF). Mixed in a 50 per cent ratio with standard aviation fuel, SAFs have the potential to lower flight emissions by up to 80 per cent.

However, their long term effectiveness in decarbonising travel is still unknown and these schemes are still voluntary and expensive. What impact they will have remains to be seen.

When you do fly, make it count

The pandemic has thrown into sharp relief what can happen when tourism stops.

According to nonprofit Conservation International, COVID lockdowns drove an increase in illegal mining and deforestation in Colombia and Brazil. In Africa, the charity says, the collapse of the tourism industry has driven an “alarming increase” in poaching and wildlife trafficking.

The World Travel and Tourism Council estimates that tourism accounts for 319 million jobs globally. As well as protecting forests from more extractive industries, it funds crucial anti-poaching patrols, and has helped establish marine and terrestrial reserves that preserve global biodiversity.

Carbon offsets aren’t even a sticking-plaster solution to our climate crisis.

Saving the planet will need both reductions in carbon emissions, plus extensive rewilding. If you do choose to fly, look for nature-positive holidays which actively benefit wildlife and habitats, and pick trips that ensure the money you spend ends up in local hands.

Carbon offsets aren’t even a sticking-plaster solution to our climate crisis.

Want to be a greener traveller? The truth is you’ll need to fly less and do more in your destination to reduce your carbon footprint. And when you do fly, make it count. You might find it makes for a more memorable holiday for you too.

'It's the future of the modern workforce': How to be a digital nomad