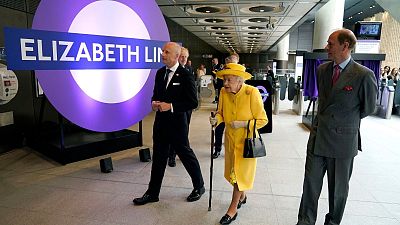 The UK monarch made a surprise visit to the new rail line completed in her honour this morning (17 May).

The new east-west Crossrail project has been 13 years in the works, and will finally open to the public on 24 May, Transport for London (TfL) confirmed last week.

Buckingham Palace called the event “a happy development”, revealing “the organisers were informed of the possibility she may attend.”

The 96-year-old has missed a number of events in recent weeks - including the annual State Opening of Parliament, which the palace put down to “episodic mobility problems.”

But she was all smiles this morning as she met with train workers. The queen was also given an Oyster card and shown how to use it on a ticket machine.

She was joined by her youngest son, Prince Edward, and Prime Minister Boris Johnson for the official visit.

“We’re all incredibly touched and moved and grateful to her Majesty for coming to open the Elizabeth Line today,” Johnson said. “It was fantastic to see her.”

How much did the new Elizabeth line cost?

The Elizabeth line itself has been rather less punctual. The 19 billion-pound (€22.5 billion) mixed overground and underground railway, is three-and-a-half years late and 4 billion pounds (€4.7 billion) over budget.

But the head of London’s public transport system says it will be “the envy of the world” when it opens next week.

“I think when it opens it is going to be a huge morale boost for London," Andy Byford said during an earlier unveiling. "What could be a greater symbol of London’s emergence from COVID than this spectacular railway?”

Where will the Elizabeth line go?

The new line will stretch more than 100km from Reading and Heathrow Airport in the west through central tunnels across to Shenfield and Abbey Wood in the east.

It will provide a speedy new link between Heathrow airport, the City financial district in the centre and the Canary Wharf business hub.

Passengers will be able to alight at busy stations including Paddington, Tottenham Court Road and Liverpool Street.

The spacious trains can carry more than 1,000 passengers each. They are also air conditioned, something that’s a rarity on London’s sweaty Tube.

The line's expected ridership has been scaled back from a predicted 250 million people a year before the pandemic, to about 200 million a year.