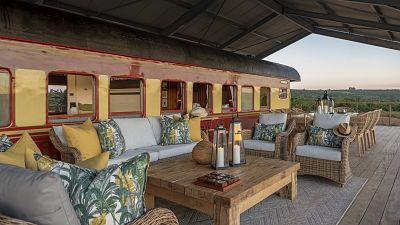 There is something deeply nostalgic about buying a train carriage you used to travel in with your family and converting it into a hotel suite.

That’s exactly what South African conservationist Adrian Gardiner has done at Mantis Founders Lodge, the flagship safari hotel in a mini empire that Gardiner launched in 2000.

Now, visitors to South Africa’s Eastern Cape can experience the thrill of sleeping onboard a railway carriage - with the added bonus of big five game drives on the doorstep.

Mantis Founders Lodge is 72km from Gqeberha (formerly Port Elizabeth), about half way between Cape Town and Durban.

The carriage dates back to the 1970s and from the outside, with its red and yellow livery, it still looks very much like a heritage train. But Mantis has made a few upgrades so guests feel like they’re travelling in first class.

The suite is permanently stationed on a hilltop within Mantis’ private safari concession, with sweeping views over the surrounding countryside where rhinos, warthog and giraffe roam.

Outside, a big decking area is perfect for al fresco dining alongside a private swimming pool.

Inside, parts of the original decor such as the bathroom and wood panelling have been preserved, so that guests can immerse themselves in rail nostalgia. There’s also an outdoor bathroom with spectacular views, playfully called the ‘Ticket Office’.

The suite can accommodate up to five guests in three cabins, arranged as a main compartment with double bed, a two-berth cabin and a one-berth cabin.

The carriage has belonged to the Gardiner family since 1990, when the Mantis founder was given the opportunity to buy it and convert it into a first-class coach for personal use.

“I managed to come to an agreement with the railways which enabled me to attach the carriage to the regular passenger services,” says Gardiner, who then used the carriage for both business and family travel around South Africa in the 1990s. On some occasions, it even served as his office.

Close to Addo Elephant National Park, Founders Lodge also has seven other suites. Rewilding is a big part of the lodge’s legacy and it runs several activities and experiences for guests linked to conservation and community impact projects.

The lodge’s development work is funded by the Community Conservation Fund Africa (CCFA) - a joint venture between Mantis and international hotel group Accor.

Since last year, the reserve has been home to a blind black rhino that the Gardiners saved from poaching. There’s a Rhino Observation and Monitoring experience that guests can book onto, along with other activities such as birdwatching, guided nature walks and interactive wildlife tracking with expert rangers.

The Mantis rail carriage is the second train accommodation to open in South Africa since the start of the pandemic. Kruger Shalati: The Train on the Bridge hotel opened in Kruger National Park in 2020.