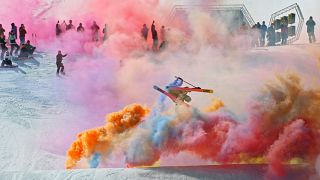 Athletes in Switzerland have ended the 2022 ski season in style.

They were a part of one of the most important end of season events, known as ‘The Nines,’ which took place at the Crans-Montana resort in April. This popular ski destination is situated in South-West Switzerland in the canton of Valais.

The event dates back to a spectacle in Germany in 2008 first known as ‘Nine Knights’. It sees the world’s top freeskiers and snowboarders travel to a new location and compete on increasingly creatively designed snow parks.

In each category, athletes can be awarded ‘Best trick’, ‘Best style’ and ‘Ruler of the week’ for their efforts doing tricks and jumps on the course.

At the end of the 2022 event, they each carried a brightly coloured flare as they hit jumps and did tricks together for one final time. And the results were stunning.

Watch the video above to see this incredible run.