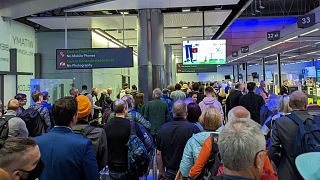 Dublin airport has been the scene of long queues and flight cancellations over the last week.   -  Copyright  Scott Brownlee
By Lottie Limb  •  Updated: 17/06/2022

Europe’s airports will face a ‘big challenge’ over summer, aviation leaders have warned, spelling chaos for millions of passengers.

The future does not look promising. Air Council International - Europe's trade body for airports - have predicted that delays are inevitable at two-thirds of European airports this summer.

“Traffic has come back heavily – 86 per cent of 2019 capacity is in the network – and a lot of traffic has moved west out of Ukraine,” cautioned Jacopo Passinotti, network management director at air traffic management body Eurocontrol.

“Volatility remains and there is additional complexity with Ukraine and airports having difficulties to hire enough staff. It will be a big challenge to manage this summer.”

Airports across the continent have been struggling to keep up with the sudden influx of passengers as more and more countries drop their Covid entry restrictions.

“Traffic is much more concentrated at weekends. We are struggling with the peaks [which] are almost as high as pre-Covid,” he said.

“We had peaks before but not as extreme.”

So what exactly is behind the Europe-wide delays, and where will the solutions come from?

What is causing the chaos at Europe’s airports this spring and summer?

While each airport is unique, the underlying reason for delays has been “the impossibility of scaling up staffing” to the required levels, says the joint statement from ACI Europe director general Olivier Jankovec and Fabio Gamba, MD of ASA (Airport Services Association).

Airports and ground handlers are emerging from the pandemic with depleted numbers, as they were “forced” to lay off staff when air traffic collapsed in 2020.

However, aviation union Unite’s national officer Oliver Richardson says “The industry is very much reaping what it has sown.

“Not only has the existing economic model been incapable of delivering decent and sustainable jobs, but this has been compounded by the behaviour of some employers who during the pandemic opportunistically slashed jobs and cut pay and conditions.”

In its statement, ACI Europe agrees that poor pay and working conditions - including working Monday-Friday without a break - are making it tricky to re-hire airport staff.

“These problems will have to be resolved not only with pay increases, but also improvements in other working conditions,” comments Richardson. “These will help ensure that an aviation job is both economically and socially sustainable for those working in the industry.”

Notoriously long security vetting times of up to 16 weeks also make it “impossible” to quickly adapt and deploy people, the statement says. In a move to speed up recruitment in the UK, the government announced plans to allow new employees to begin training before the checks are complete.

How can Europe’s airport problems be fixed?

Given the systemic understaffing issues, most airports - especially bigger ones - expect that the quality of passenger’s experience will be “unavoidably affected” this summer.

There’s one note of optimism in the new survey, however. Though two-thirds of airports foresee flight delays increasing, only 16 per cent expect flight cancellations to rise too.

But in a sign of how much work remains, 35 per cent of European airports said they expect the airport and ground handling staff crunch to affect their operations beyond the summer season.

“Airports and ground handlers are leaving no stone unturned as they strive to overcome these challenges,” say Jankovec and Gamba, admitting that “short-term, there is no quick and easy fix.”

How do airlines and airports work together - and is it working?

One measure the industry heads are calling for - alongside quicker security clearance for staff - is better communication from airlines.