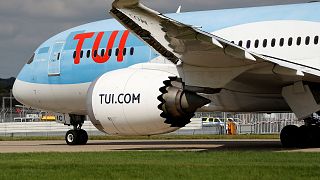 Holiday giant TUI will replace plane seats with train tickets on some routes, in an effort to reduce its carbon footprint.

Passengers booking Tui city breaks will be offered the chance to travel by rail from the Netherlands to six European cities.

The move will be launched by TUI’s Dutch division as part of a collaboration with train travel start-up Green City Trip.

Where will the Tui rail journeys go?

Passengers will be offered rail journeys from the Netherlands to Copenhagen, Prague, Vienna, Venice, Milan and Florence.

"Where the train can be an equivalent replacement for the airplane, we will gladly put this in the spotlight.

"And even where it is not a replacement but a valuable addition, we want to draw attention to it.”

Flight tickets will still be available for these routes.

What is the environmental impact of flights?

A return flight from London to New York emits around 0.67 tonnes of CO2 per passenger - roughly the same amount the average person in Ghana is responsible for in a whole year.

Alongside this greenhouse gas, aircraft engines emit other elements like nitrous oxides and sulphur dioxide as well as particulates such as soot.

To tackle the climate crisis, there is a huge need to decarbonise travel.

Green City Trip - the company partnering with Tui to offer passengers more rail options - are part of this change.

“Customers are looking for a sustainable alternative to flying - the way that people think is shifting,” says Maarten Bastian, Green City Trip CEO

“Our sustainable travel network has been very successful. The demand for greener travel is huge, and growing.”

Climate guilt isn’t the only reason to travel by train, Mr Bastian said.

“It’s not only about sustainability - the experience of train travel can be more enjoyable,” Mr Hessel said.

“Everyone has seen the queues and cancellations at Schiphol - there are no queues for our trains.”

Last weekend the Netherlands’ national airline KLM cancelled more than 70 flights from Schipol, while other airlines - including Transavia, Tui and Corendon - rerouted flights to other Dutch airports.