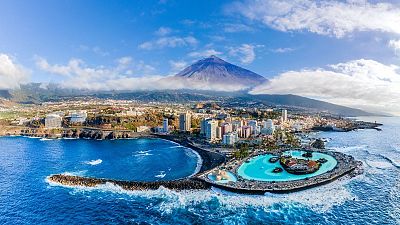 An aeriel view of Puerto de la Cruz, one of Tenerife's top resorts. Flights to the island from London were down by 65 per cent last week, compared to the same time last year.   -   Copyright  Getty Images/Balate Dorin   -
By Lottie Limb  •  Updated: 03/05/2022

There’s no doubt that life has got more expensive in recent months, with Europeans seeing the energy crisis inflate most basic outgoings.

Whether or not holidays are being hit by the same global factors is a more complex question, however. Though some airlines and travel insiders warn that rising fuel costs will soon be passed onto passengers, this isn’t yet the case across the board.

As more and more European countries simplify their entry rules - and people’s confidence in having a stress-free stay grows - increasing demand is set to ramp up ticket prices. But until fliers fully return to their pre-pandemic numbers, some carriers are still trying to entice people back to the skies with cheaper deals.

And with good reason. According to a recent Skyscanner survey, more than half of German participants and 36 per cent of Brits consider cost to be one of the most important factors when booking a trip abroad in 2022.

So as we satisfy our wanderlust this year, here are some key ways to make air travel more affordable.

When is the best time to book a holiday?

If you’re hovering over a summer holiday booking, it’s best to take the plunge now, according to one of the biggest travel search engines.

“For travellers in the UK, international flight prices for the summer have been on a steady decrease since the start of the year, but with increasing demand for the upcoming summer months, prices are likely to rise again soon,” explains KAYAK’s UK manager Evan Day.

Over the past two weeks, searches for summer travel on the site have surpassed pre-pandemic levels by about six per cent, he says, suggesting a rebound is well underway.

Around six weeks in advance [is] the optimal time for finding great international flights for summer.

“In previous years, we found that around six weeks in advance was the optimal time for finding great international flights for summer, and that appears to still be consistent with what we’re seeing this year.”

By that calculation, it’s probably best to book this week if you’re planning a mid-June getaway.

But due to the complex way airlines price their tickets to try and maximise profits, there’s no one winning formula. As cheap flights guru Jack Sheldon explains, airlines have targets for how many seats need to be sold on each route by a certain date, and will lower or raise their prices accordingly.

The general rule is it’s better to book sooner - especially for short-haul flights when the cheapest seats are released immediately. This means planning at least eight months in advance. But as users of Jack’s Flight Club know, there’s plenty of good last minute deals to be found if you’re willing to wing it.

How are holiday prices affected by the war in Ukraine?

Airfares could fluctuate more dramatically this year due to the high cost of oil, exacerbated by Russia’s invasion of Ukraine.

“Rising oil prices do put mounting pressure on fares, but the cost of oil isn’t the only factor; it's that airlines are more likely to pass some of those eventual fuel-cost increases to purchasers if the demand for travel continues to grow as it has been doing,” a spokesperson for travel tech company Kiwi says. That growing likelihood is another reason to book flights sooner rather than later.

Airlines are more likely to pass fuel-cost increases to purchasers if the demand for travel continues to grow.

“Rising fuel prices have been a continuing trend for the past 18 months due to capacity bottlenecks and a pick-up in consumer demand,” the firm adds, “but the war in Ukraine has accelerated the inflation trend."

Some airlines are more impacted than others, according to Kiwi. Low cost airlines typically have a more modern and fuel-efficient fleet than their steeper rivals, allowing them to better absorb the fuel costs. That said, fuel represents a larger percentage of their cost base than for traditional airlines.

Of course, flights aren’t the only major expense on a holiday. Car hires and hotel stays could also be more expensive this summer, depending on the local picture. If you’re planning a trip to the US, note that domestic airline fares are up by 24 per cent according to the Bureau of Labor Statistics, amid an exceptionally high inflation rate.

Why flights might not be as expensive as you think

Some budget airlines, including Ryanair, easyJet and Wizz Air, have ‘hedged’ their fuel costs - meaning they have pre-ordered fuel at a capped cost for the next few months. This helps shield passengers from the soaring cost of oil - at least until next year.

“As demand begins to match supply, it’s important to know how to weigh up your options and tailor plans to get the best price - whether it’s flying out a day or two early, hopping on a train to a nearby alternative airport or exploring an alternative destination that’s a fraction of the cost.”

Top tips for saving money on flights - from a Skyscanner expert

Hahn shared some other top travel hacks with us for making your flights more affordable:

Which European destinations are cheaper than last year?

Against expectations, recent data from KAYAK shows that flight prices to several top European destinations are actually significantly down on last year.

Second on the list is Milan which, despite having artworks to rival Rome and Florence - not to mention the catwalks you can see on the streets every day - is routinely cheaper than other major Italian cities to fly to.

Airfares are available for a staggering £4 one-way from London, according to KAYAK’s site, and on average set you back £12 in April. That’s a 46 per cent fall compared to the same week in 2021.

Bear in mind, though, that Milan Malpensa has seen some of the most flight cancellations of any European airports in the recent chaos at UK airports.

Paris, Edinburgh and Malaga also made the top five destinations with the biggest drop in flight prices, suggesting there are still plenty of deals to be found if you shop around.