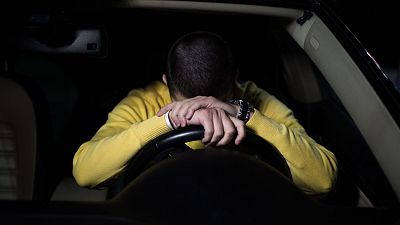 British expats have been banned from driving in Spain, after post-Brexit talks on license rules broke down.   -   Copyright  Canva / Andrija Nikolic   -
By Charlotte Elton  •  Updated: 03/05/2022

British expats have been banned from driving in Spain after post Brexit talks on license rules broke down.

Under tough new restrictions, UK nationals who have lived in the EU country for more than six months will no longer be able to use their UK-issued licenses.

The strict new policy will mean chaos for tens of thousands of Britons who must obtain a Spanish driving license to get back behind the wheel.

Why can’t Brits drive in Spain?

The restrictions came into force on May 1, after the Spanish and UK governments failed to reach an agreement about DVLA-issued licenses by the April 30 deadline.

A Foreign Office spokesman promised that the UK and Spanish governments would “rapidly accelerate talks.”

“An agreement to swap UK driving licenses for Spanish licenses has not yet been reached,” they said.

“(We) are urging the Spanish Government to bring forward interim measures.

“We remain committed to reaching a deal and the UK already has similar arrangements in place with 24 other EU countries."

It is unclear when the situation will be resolved, a government source told the Mail on Sunday

"This could go on for a week or it could be longer. It should be temporary but we don't know how temporary," the source said.

Who does the new rule apply to?

The new rule will impact British expatriates living in Spain. Luckily, it does not apply to tourists or people in Spain for a stay under 90 days - the limit for Brits to be in the country without applying for a visa or residency permit.

British expatriates have turned to social media to vent their fury at the bureaucratic bungle.

“Shocking in every sense of the word.”

“I have been driving perfectly legally for 46 years,” social media user Colin Wilson posted on a Facebook group.

“I am disgusted [by] the way we have been treated by both governments."

How can British expats get Spanish driving licenses?

To get back on the road, newly banned expats must apply for a Spanish license.

But the costs could be eye-watering.

A Spanish driving test costs €94.05 - plus €35 for a mandatory pre-test physical examination.

If the driver passes, they must pay a €99.77 fee to have their license issued.

These are the baseline costs - but it’s hard to pass without lessons. Registration with a school costs around €200, while classes will set you back roughly €25 per 45 minute session.

Spain is the ninth most expensive country in the world to get a driving license, a 2020 study revealed.

That’s excluding the cost of possible language classes. People can take the Spanish theory test in English, but the practical test can only be conducted in Spanish.

What does the new driving ban mean for tourists?

Holidaymakers can breathe a sigh of relief - tourists can still drive using their UK licenses.

This is good news for the thousands of Brits who travel to Spain every year.

They may be able to drive, but many will be subject to tough new rules on anti-social behaviour.

In parts of Ibiza and Majorca, holidaymakers have been restricted to six alcoholic drinks a day at hotels, though they can pay additional fees if they want more.

115 of Spain's 3,514 beaches have prohibited smoking, including beaches around Barcelona. A countrywide law is currently being debated that could turn all of Spain’s beaches into smoke-free areas.

How will Sinn Fein's win in Northern Ireland impact Brexit?