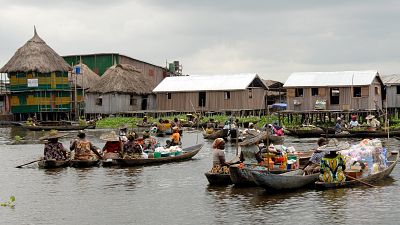 Vendors display their goods in pirogues at a floating market in Ganvie, Benin.   -   Copyright  Florin Iorganda/Reuters   -
By Doloresz Katanich  with Reuters  •  Updated: 30/04/2022

A region of Benin that has been dubbed the ‘Venice of Africa’ is attracting more tourists than ever before.

Ganvie village was built in the middle of Lake Nokoué 400 years ago and its unique history starts in the era of slavery. In the 18th century, the people of the local Tofinu tribe were desperate to escape from the soldiers of the Fon and Dahomey kingdoms who captured people and sold them to Portuguese traders.

The ancestors of today's residents fled to the lake which was feared by the soldiers who believed a terrible demon lived under its surface. Knowing this, the tribe chose to build their homes on stilts in the middle of the water.

The name of the village pays tribute to this history, Ganvié means ‘we survived’ in the local language.

Despite the fact that they were no longer under threat, people kept living in their lake homes. Over the centuries, Ganvié has grown beyond all recognition.

What is life like in the ‘Venice of Africa’?

Today, there are approximately 30,000 people living in the village - they are known as the ‘watermen’.

"We live by fishing," says resident Edmon Adissa. "We settled here to escape from slavery. We make our living by fishing."

Even today, everything in the village stands on stilts from the beauty bar to markets, hotels, schools, a hospital, businesses and churches. Narrow canoes called pirogue are the only means of transportation.

But tourism has gradually replaced fishing as Ganvie's main source of revenue. Around 10,000 tourists visit the lake village annually, according to local the tourism office.

Watch the video above to see the 'Venice of Africa'.