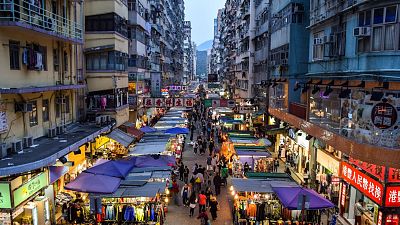 After more than two years of stop-start border closures which have left Hong Kong effectively cut off from the world, the territory is finally due to reopen to tourists from 1 May.

But - there’s a major catch - because visitors will still be required to check into a quarantine hotel for seven days - even with a negative COVID test.

Under the new rules, travellers will need to submit to a rapid COVID test at the airport upon landing. Once the results have been processed, those with a negative test will be taken by government transfer to one of its designated quarantine hotels. The rules state that travellers must remain in their room for a full seven days.

Those with a positive test result will be moved to a government isolation facility for a minimum of seven days instead. So regardless of the state of your health upon entering Hong Kong, you will still end up with a minimum week-long stint in isolation under the long-awaited new rules.

Regardless of the state of your health upon entering Hong Kong, you will still end up with a minimum week-long stint in isolation.

There are almost 50 designated quarantine hotels in Hong Kong, with prices starting at a minimum of €65 for a single person per night, full board, in a room measuring just 10 sq metres.

However prices can skyrocket to as much as €770 per night for the most desirable, more spacious rooms at luxury hotels such as the Landmark Mandarin Oriental in Hong Kong’s Central district.

The use of quarantine hotels to control tourist entries from 1 May is unlikely to encourage tourists to book a break in Hong Kong, which before the pandemic had built a reputation as a long-haul city-break destination. In 2019, international visitors spent an average of just three to four nights in Hong Kong per trip, according to Statista.

How the ‘zero COVID’ policy failed in Hong Kong

Hong Kong’s borders have been closed to non-residents since 25 March, 2020. Following China’s lead, the territory has been living under some of the strictest COVID measures in the world. Hong Kong ramped up social restrictions again in January this year as Omicron infections surged, hospitals became overwhelmed and morgues overflowed.

The former British colony has only just started to relax those social distancing measures. The first phase of reopening began on 21 April, when restaurants were allowed to reopen for dine-in services until 10pm, and theme parks opened for the first time in four months.

This won’t be until at least mid-May, but as yet no date has been confirmed. With such limitations in place, it’s hard to see the attraction of a holiday in Hong Kong when borders reopen to tourists next week.

Will your flight to Hong Kong be cancelled?

The territory has also been routinely banning flight routes that carry in COVID cases. Under the current rules, a flight suspension will be triggered for a seven-day period if at least three people on a flight test positive. From 1 May, this will be relaxed slightly to five people, or 5 per cent of the flight, whichever is greater; and the ban will be in place for five days instead of seven.

In recent months these flight bans have caused chaos for Hong Kong residents, who have found themselves scrambling to rearrange travel plans and reorganise re-entry quarantine hotel stays at short notice.

On 1 April this year, Hong Kong lifted the total ban on flights from nine countries including the US and UK.

On 1 April this year, Hong Kong lifted the total ban on flights from nine countries including the US and UK. Yet as long as the flight-ban trigger system remains in place, it’s likely to lead to mayhem for tourists as more international flights resume service to Hong Kong, increasing the risk of COVID being brought into the country.

Some airlines are not restarting flights to Hong Kong until later in the year.

How many COVID cases are there in Hong Kong?

In March 2022, Hong Kong reported the highest number of COVID deaths in the world, based on population size. The dire situation was due to Omicron, but exacerbated by low vaccine take-up across the city.

In the past month, social distancing measures have helped Hong Kong claw its way back from spiralling infection rates.

In the last seven days, there were 47 new cases per 100,000 and 514 new infections reported on average each day – just 1 per cent of the peak, according to Reuter’s COVID-19 Tracker.