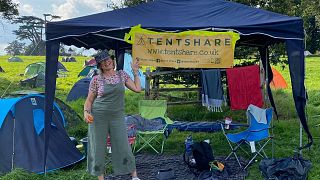 Becka Heaps of Tentshare is on a mission to cut camping waste   -   Copyright  Becka Heaps
By Catherine Lofthouse  •  Updated: 23/04/2022

Scenes of discarded tents at festivals and popular beauty spots have caused concern across Europe in recent years. But now a scheme based in the UK is offering a greener way to holiday al fresco.

As an antidote to abandoned tents at summer festivals, campers across Britain are signing up for rent-a-tent schemes, meaning they no longer have to splash out on camping gear they might only use once.

Why are abandoned tents such a big problem in the UK?

Over Easter, nature sites in Scotland and Wales were littered with abandoned camping waste, including tents and sleeping bags. The waste was left behind by visitors making the most of the warm weather, according to a Facebook post from the Highland Council Access Rangers.

The rangers follow a standard operating procedure, including observing a site over several days to make sure it is abandoned. Working in teams of two, they then document what they find inside discarded tents, in case owners want to reclaim possessions.

The Scottish Outdoor Access Code states that wild camping is only suitable for lightweight tents, in small numbers for up to three nights, and should not take place near buildings or roads, in enclosed fields or near historic monuments. Wild campers should also leave no trace.

How does tent sharing work?

Becka Heaps founded Tentshare in February 2020, matching tent owners to would-be campers who don't have their own equipment.

She points out that in a time of rising living costs, renting out a tent that you only use a few times a year can be a good way of earning money. It also means that people who can't afford their own equipment will have the chance to camp.

Regarding the abandoned tents over the weekend, she says: “'There should be a leave no trace policy, but I don't think people really know about that. Some campsites last year had to close because people left so much waste, tents and camping chairs that they couldn't get rid of it. It's an absolute nightmare.

"People buy boxes of cheap camping equipment, but it's probably not the right equipment for what they want to do,” she continues.

“Then it all breaks or gets blown away or they haven't used it properly and they don't have a great time. They think: I'm going to leave it there and let someone else sort it out."

One festival tent is the carbon equivalent of 350 plastic bottles and research from the Association of Independent Festivals (AIF) suggests that pre-COVID-19, 250,000 tents were left behind at UK festivals every year.

Becka has now partnered with Camplight, which offers pre-pitched tents at festivals to help prevent the fields of abandoned items seen in previous summers.

Working at Standon Calling last year, the team of four pitched 55 tents so that festival-goers could travel lighter, either by train or with more people per car. The Camplight team also salvaged more than a 100 pop-up tents and a similar number of camping chairs left behind during a heavy downpour right at the end of the festival - the carbon equivalent of 22 return flights to Madrid.

People buy boxes of cheap camping equipment, but it's probably not the right equipment for what they want to do

Both Tentshare and Camplight mend salvaged tents where they can, and pass on any that are beyond repair to companies such as LittleReCreations to be made into bags and other items.

In February, Camplight pitched 300 tents on a film set to recreate a refugee camp. One tent had been salvaged in 2010 and has been used at countless festivals since.

And some salvaged tents even make their way to real camps in Calais, thanks to donations to charities like Herts Refugees. Camping equipment in good condition collected by the Highland Council Access Rangers is often donated to refugee charities too.

But as Becka points out, when tents left at festivals and campsites have been fouled by human waste, it's hard to make them fit for future use.

"The Tentshare community is helping to reduce consumption and waste while also contributing to the local and circular economy. By promoting camping, Tentshare is encouraging people outside to reconnect with nature and the magnificent earth we live on,” she says.

“The ‘sharing economy’ business model goes some way to providing a solution to many of the problems we are all facing in this world today.”