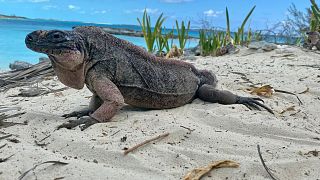 Ecotourists feeding grapes to these rock iguanas are giving them a sweet tooth.   -   Copyright  ERIN LEWIS / THE COMPANY OF BIOLOGISTS / AFP
By Rosie Frost  with AFP  •  Updated: 22/04/2022

Scientists say the sweet snacks are raising the rock iguanas' blood sugar and they don't yet know the consequences this could have for this endangered species.

Every day, dozens of speedboats land on the white sandy beaches of the Exumas Islands. The visitors attract the Cyclura cychlura or Northern Bahamian rock iguanas, which rush to the boats with the expectation of being fed grapes from the end of skewers.

These reptiles are classified, depending on the subspecies, from "vulnerable to "endangered".

A team of American researchers has studied the effect of this repeated and unnatural feeding on the animals' metabolism. They compared the blood glucose levels of iguanas with those of animals from the same species living in nearby islets where the rocky landscape prevents tourists from visiting.

The results of their research on four populations of iguanas (two fed with grapes, two fed with natural food) are clear. There were "significant effects" on iguanas fed by the ecotourists - including much higher blood glucose levels.

To ensure that the grapes really the cause of the high blood sugar levels, they replicated the experiment in the laboratory on common green iguanas, a non-protected species. The results were identical.

Are the grapes impacting the iguanas' health?

The researchers themselves admit they don't know if this change in metabolism is inherently bad for the lizards' health. But "we could call it diabetes if they were humans or mice," Susannah French, lead author of the study, told AFP.

And the researchers have already noted physiological effects, particularly on the animals' poo. When the iguanas eat their natural diet of plants, it is shaped like a "Cuban cigar, a bunch of rolled-up leaves." But it becomes much more liquid when they eat the fruit provided by visitors to the islands.

A previous study had already shown that iguanas living on beaches where they are fed are larger, heavier and grow faster than their counterparts not exposed to tourists.

The researchers insist that their study is not a condemnation of tourism. They want to work with tour operators in the Bahamas to "find a more sustainable plan," says Charles Knapp, another of the study's authors. Among the potential solutions, they suggest the islands could regulate the number of visitors or "use of another type of food".