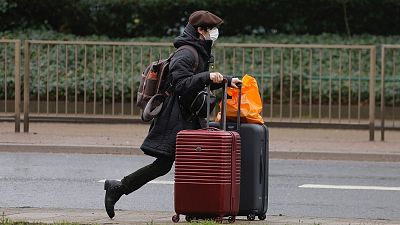 More than £400 million (€480m) of UK taxpayer money was spent on quarantine hotels last year, but an official audit has shed doubt on the success of the policy.

Only 2 per cent of guests from ‘red list’ countries tested positive for COVID-19 between February and December 2021, according to a new report from the National Audit Office (NAO). The public spending watchdog also found that as many as 42 per cent of people broke quarantine rules, despite a private firm being paid £144 million (€173m) to make checks.

Quarantine hotels - where passengers arriving from the riskiest countries had to spend 11 nights - already had a notorious reputation in the UK. Reports of sexual harassment, substandard food and “prison like conditions” emerged from the holding spaces last year, with one law firm even accusing them of being a “fundamental abuse of people’s human rights”.

The managed quarantine system (MQS) was launched by the Department of Health and Social Care (DHSC) in mid-February 2021, resumed during December’s Omicron spike, and was finally abolished last month - with the rest of the UK’s international travel rules.

It’s hard to keep track, however, as the report also found that Britain’s border rules changed at least 10 times between February 2021 and January 2022.

Here are the key details from the watchdog’s report on how the UK managed cross-border travel during the pandemic.

How much did the UK’s quarantine hotels cost?

According to the report, the DHSC originally thought the cost of running the service would be met by the price charged for hotel rooms - which cost a steep £1,750. But as it turned out, UK taxpayers footed more than half of the bill. Corporate Travel Management was the company which won a £385m contract from the DHSC to run the hotels.

Almost £100m of the quarantine hotel cost came from unpaid room bills, Covid tests, and fraud - with £18m falsely reclaimed in credit card chargebacks. But only two cases were investigated or challenged, the NAO reports.

How many people stayed in the managed quarantine hotels?

Some 214,000 arrivals from red list countries, including South Africa and Brazil, were held in quarantine hotels between April and December 2021. Another 14,000 passengers were able to claim exemptions from the managed isolation period, the NAO estimates.

But the UK Health Security Agency - which won a £114 million (€136m) contract to check on those self-isolating at home - was unable to confirm whether 33 per cent of those required to stay put actually did so. Non-compliance is believed to have been between 26 to 42 per cent during these months.

How many COVID cases did the UK’s quarantine hotels stop?

In short, we don’t know. The public spending watchdog says that the DHSC “has not been able to determine” how many COVID cases were prevented by keeping people in the managed quarantine system.

This isn’t the only area in which the government has failed to measure the success of its travel restrictions.

"Although individual departments have been monitoring their own spending on implementing cross-border travel measures in response to COVID-19, government has not routinely tracked the total cost across government despite spending at least £486 million," the National Audit Office said in a statement.

“Government told the NAO that cost had not been a factor in its implementation decisions,” the report adds. But, “Without a set of performance measures to track effectiveness and with no evaluation of the additional costs incurred, government cannot demonstrate that its implementation measures have achieved value for money.”

In its wider investigation, the NOA found that passenger locator forms (PLFs) had a limited impact in stopping the spread of the virus, because checks by airlines “focused on the existence rather than the accuracy of data.” This meant passengers were able to put down false information about their address and other details.

The UK’s approach to COVID testing for travellers was also criticised, with the report concluding that the “government had limited oversight of the market it created, and the service to the public has sometimes been poor.”

Until recently - January for vaccinated people, and March for the unvaccinated - inbound travellers to the UK had to book and take a PCR test with one of the providers listed on the government website.

But within this official list, customers were left navigating some unscrupulous practices. There was a huge range in prices, with 369 companies offering prices ranging from £15 to £525 (€18 - €626) as of 15 February this year.

In November, we reported on PCR tests being advertised for as little as 95p (€1.12). Companies were listing these surprisingly cheap prices to appear higher up on the list, but the reality was more complicated - with some tests only being available to collect before departure (meaning they were inaccessible to people based outside the UK). Other companies only had a very small number of the cheap tests, meaning it likely cost you much more once you clicked through.

The NOA says, “Firms listed on gov.uk have often marketed themselves as being government approved, but DHSC’s listing process gave minimal assurance that they can provide the services.”

It also found that, despite complaints of providers failing to deliver tests or results, DHSC has yet to formally respond to the Competition and Markets Authority (CMA) - the consumer watchdog which recommended action was taken last September.

A more ‘systematic’ approach is needed in case of future outbreaks

NAO boss Gareth Davies acknowledged that the government has had a difficult job in balancing “many competing objectives” when managing the border during the pandemic. But two years on, he urges it to take the “opportunity to ensure that it develops a systematic approach to managing any future travel measures.”

In response to the findings, a UK government spokesperson told the Guardian: “The pandemic was an unprecedented challenge and we acted swiftly and decisively to implement policies designed to save lives and protect the NHS from being overwhelmed.

“As the report notes, considerable efforts were made across government to put border measures in place that helped to protect the UK from arriving cases of Covid-19. These measures bought vital time for our domestic response to new and concerning variants, contributing to the national effort to contain and manage the virus.”