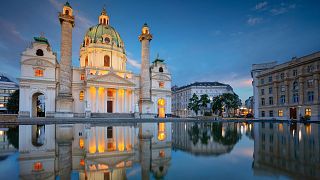 If you’re planning a European city break this summer, Austria’s green and pleasant capital should be top of your list. Lying in the east of Austria, Vienna is the birthplace of hundreds of cultural icons, and with nearly 50 per cent of the city made up of green space, there are plenty of parks to relax in too.

One of the continent’s grandest cities, Vienna isn’t short of architectural gems and famous former residents. In fact, it seems like every renowned European composer lived here at some point, including Beethoven, Mozart, Brahms and Mahler.

Despite all its history and beauty, Vienna isn’t the cheapest city in the world. In fact, Austria was ranked as the 18th most expensive country to live in the world by CEOWORLD Magazine, and while not as expensive as famously-expensive London, if you’re on a budget you might feel the pinch.

But don’t worry. With a little forward planning and the help of our guide, it’s more than possible Vienna on a budget.

Is it easy to travel to Vienna?

Vienna is easily accessible by train from most European countries, making it a great place to visit if you want to travel sustainably as well as cheaply.

From the UK, travellers can hop on the Eurostar to Brussels, before getting a connecting train to Frankfurt and then travelling on to Vienna. If you set off early, you can easily get there in a day.

Alternatively, after arriving in Brussels in the afternoon, you can jump aboard the NightJet Sleeper train, which will take you to the capital overnight.

Where can I stay in Vienna?

There are some cheap accommodation options on offer in Vienna, if you look hard enough. If you’re feeling outdoorsy there’s a campsite - Aktiv Camping Neue Donau - just outside the city, and with prices from €36 for two adults per night, it won’t break the bank either.

Vienna has some great hostels too. From Vienna Boutique Hostel, which has free WiFi and rooms from €29.95 per night, to Hostel Ruthensteine from €16.97 per night, which also has a great garden and music space too.

If you’ve got a bigger budget and want to travel sustainably, the Henriette City Hotel has won multiple awards for its eco-credentials and is certified with the EU Ecolabel.

Austria is well known for its meaty dishes - including, tafelspitz (boiled beef in broth) and wiener schnitzel. The latter is traditionally made from a cut of veal: the meat is pounded flat before being covered in breadcrumbs and fried.

If you want to sample some schnitzel, head to Schnitzelwirt. Popular with tourists and locals alike, the restaurant serves big portions for reasonable prices.

If you don’t eat meat, you’ll be pleased to hear the vegan movement is booming in Vienna. For the best vegan ice cream in town, head to Veganista which has shops popping up all over the city. With flavours ranging from basil to maple and pecan, you’re bound to find one (or two, or three) that you like.

If you don’t eat meat, you’ll be pleased to hear the vegan movement is booming in Vienna. For the best vegan ice cream in town, head to Veganista which has shops popping up all over the city.

Speaking of sweet treats, make sure to grab a slice of Vienna’s decadent sachertorte before you leave. Made of chocolate sponge covered in dark chocolate ganache with an apricot jam centre, you can find the cake all over the city.

If you’re feeling flush, visit Café Sacher or Café Demel - who even went to court to claim the right to use the phrase ‘original sachertorte’. Spoiler: Cafe Sacher won. Chain cafe Aida Café Konditorei also makes a decent (and cheaper) alternative too.

One of the cheapest and most relaxing things you can do in Vienna is visit some of its gorgeous green spaces. Burggarten and Stadtpark are free to enter, and the former boasts a stunning palm house, while music lovers can pay homage to the statue of Mozart too.

In the summer months, join the crowds of locals in the 21km long Danube Island, an artificial island in central Vienna, which is also home to the world’s largest trampoline centre and a huge water playground for kids.

There are beaches and bathing sites here too, making it a great place to soak up some Viennese sun.

If you’re planning on visiting a lot of tourist sites around the city, consider getting a Vienna Card. You can buy a card for 1-3 days and it’ll give you unlimited access to public transport, as well as discounts on a huge range of museums, shops and restaurants. You can pick one up at the airport or online.

History lovers should check out the Sigmund Freud Museum to learn more about the hugely influential psychoanalyst, before taking a walk around the historic centre of Vienna, now a UNESCO World Heritage Site.

History lovers should check out the Sigmund Freud Museum to learn more about the hugely influential psychoanalyst, before taking a walk around the historic centre of Vienna, now a UNESCO World Heritage Site.

The city is also home to the world’s oldest zoo - founded in 1752 - and the Wiener Riesenrad, an iconic ferris wheel built in 1897. The ride sits at the entrance to the Prater amusement park and featured in the classic 1940s film The Third Man.

And finally, if you want to celebrate Vienna’s green city credentials, make sure to visit its green museum. The fine art museum, the Kunst Haus Wien, holds exhibitions focusing on art, ecology, sustainability and recycling, all housed in a unique and quirky building.