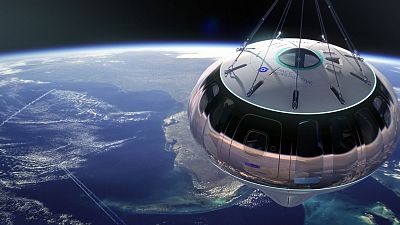 A giant, floating balloon will be launching off to space soon - carrying passengers who are keen to explore outer space.   -   Copyright  AFP
By Maeve Campbell  with AFP  •  Updated: 15/04/2022

If admiring the curvature of the Earth while sipping a glass of champagne is your idea of a great holiday, you might be in luck.

An American company called Space Perspective is planning to send tourists into the cosmos in huge, hydrogen balloons.

And this week it revealed what the interiors of its capsules will look like.

At a time when space tourism is on the rise, the company hopes to enter the market in 2024. More than 600 tickets have already been sold.

Large, high windows, soft seats, purple tones and subdued lighting... This is the atmosphere depicted in the illustrations so far. It’s a stark comparison with competitors' space capsules which are often white and sanitised.

Other features of the new Neptune ‘ships’ include a bar, functioning WiFi and spectacular views - even from the toilets.

At this altitude there is no weightlessness, but it is much lower than other space tourism companies.

Although the space balloon won’t go as high as others have in the past (80km for Virgin Galactic and 100km for Blue Origin), it is still much higher than airplanes which fly up to around 10km.

Co-founder of the company, Jane Poynter, says passengers will be rising “above 99 per cent of the atmosphere”.

"We wanted to find a way to really change the way people think about space travel," Poynter told AFP. "What balloons allow us to do is take people into space smoothly, comfortably."

Seatbelts only need to be fastened for the first 15 and last few minutes.

When will the balloons take off?

The first balloon, inflated with hydrogen and as large as a soccer stadium, will depart from Florida in the US. It will rise for two hours, remain at its peak for the same amount of time, and then begin a two-hour descent.

Most importantly, there will be no greenhouse gas emissions associated with the trip - one of the main criticisms of the space tourism sector - the company claims. Space Perspective says it will take the hydrogen from renewable sources to power the ship. Then, at the end of a flight, the capsule will be reused while the balloon will be recycled.

Space Perspective says it is planning 25 flights in the first year, and all of the tickets have already been booked.

"There is so much demand that the market will only be limited by the industry's ability to meet that demand for years to come," says Jane Poynter.