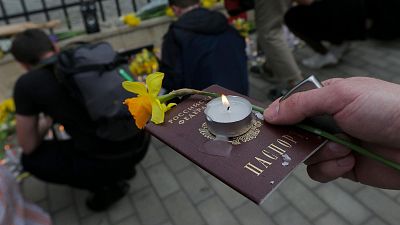 A demonstrator holds a Russian passport with a candle and a flower during an anti-war action in front of Ukrainian Embassy in Tbilisi, Georgia.   -   Copyright  AP Photo/Vasily Krestyaninov
By Rosie Frost  •  Updated: 11/04/2022

Every year, the Henley Passport Index works out just how far each country’s passport will get you when travelling around the world.

This year, the index also paints a fascinating picture of the impact the Russian invasion of Ukraine has had on the world.

The Henley Passport Index uses exclusive data from the International Air Transport Association (IATA) to rank 199 passports based on where their holders can travel, without first applying for a visa.

Top of the list for 2022 are Japan and Singapore, which offer access to 192 nations without the need for a visa. Afghanistan comes in last with visa-free or visa-on-arrival access to just 26 countries.

What impact has the Ukraine war had on the power of passports?

The report was published several weeks after the invasion of Ukraine in February. And it “clearly illustrates the war’s profound and perhaps irreversible impact on freedom of movement within the region as a new Iron Curtain descends,” according to Henley & Partners, the firm behind the index.

Numerous Western countries including the US, Canada and the EU have imposed travel restrictions on Russian citizens. Many have closed their airspace to Russian carriers and some have stopped processing visa applications from Russian citizens altogether.

Although the impact isn’t yet clear in this year’s rankings, the report suggests this is likely to change in the coming months.

The war in Ukraine is “effectively condemning the Russian passport to junk status throughout much of the developed world,” says Henley & Partners.

The country dropped four places to 49th in the rankings compared to Ukraine which rose to 34th this year. It is a gap those who co-authored the report believe is only likely to grow if the conflict continues.

The world is opening its doors to Ukrainian refugees

The passport you hold determines your fate and dramatically impacts the opportunities you have.

“As the value of the Russian passport rapidly declines and the world opens its doors to Ukrainians, it is abundantly clear that the passport you hold determines your fate and dramatically impacts the opportunities you have.”

While it is impossible to predict what the world will look like in the shadow of a new Cold War, the latest predictions suggest that “the divide between Russia and much of the Western world will only increase,” says Kaelin.

In stark contrast to Russia, the power of Ukrainian passports has soared as countries look to accommodate the more than 4 million people who have so far fled to neighbouring countries.

The EU has approved an emergency plan to allow citizens to live and work in any of the 27 member states for up to three years. Other countries have adjusted their visa policies in favour of Ukrainians with some waiving requirements altogether.

It has meant that Ukraine now has visa-free or visa-on-arrival access to 143 countries around the world. It saw the highest increase on the list this year with the country climbing 26 places in the last decade.