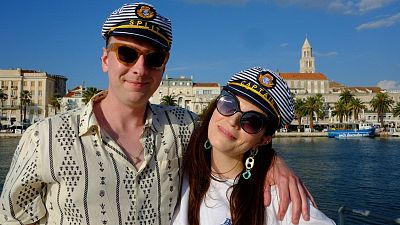 Travel Man is back on UK TV screens this week, and with it a whirl of delightful European minibreak options that have got us dusting off our suitcases.

There’s a new Travel Man on the bloc this year, comedian Joe Lycett, who will be taking other celebrities on 48-hour city tours.

Led by the puntastic Lycett, the long-weekenders have a penchant for seeking out some of Europe’s best and quirkiest attractions. With such snappy editing, it’s well worth spending 20 minutes being whisked away during each episode.

But if you want to know where to start, here are our favourite picks from the series so far.

A round of golf is a novel way to get to know the striking port city of Antwerp in Belgium. Tee up at some of the most historic places in town and learn as you go with one of City golf tours’ knowledgeable guides.

Hitting the statue of famous Flemish painter Peter Paul Reubens - or sending a golf ball flying across the Great Market - is sure to make those facts sink in better.

Travel notes: Joe and Katherine travelled by train from St Pancras to Antwerp Station, on £78 (€93) return tickets that took three hours each way. The magnificent Anterwerpen-Centraal station, with platforms on four levels, got a fine review itself.

Katherine called it “My kind of station. It sort of expands the imagination for travel.”

Cyprus is a gorgeous, sun-soaked island country, known as ‘the playground of the Gods.’ For foodies, it’s also closely associated with one of its biggest exports: halloumi.

If you’re a fan of the cheese, or just enjoy unique culinary experiences, you can go right to the source. Take a goat-milking, cheese-making workshop, to learn about this world-famous dairy product before sampling your handiwork. As Joe put it, the experience takes you “from teat to table” in just three hours.

Workshops cost around €90 per person from Cyprus Taste Tours.

Travel notes: For accommodation, we’re completely sold on the colourful wonderland that Joe and Mo stayed at in Limassol. Euphoria Artland was created by Cypriot designer Anthos Myriathous, following a bioclimatic playbook using recycled materials to create rooms of all shapes and hues.

As Joe remarked, there’s also “a sarcastic amount of cats” hanging around the accommodation - a plus for animal-lovers.

Undoubtedly one of the most niche attractions in Europe, Froggyland has a collection of 507 stuffed frogs. There are 21 exhibits showing the deceased amphibians in a range of scenes, from classrooms to gymnasiums, drinking in restaurants and performing carpentry.

Expert taxidermist Ferenc Mere stuffed the frogs’ mouths with cork to give them their uncanny appearance. They’ve been preserved ever since, making quite an impression on tourists in Split over the years.

“It’s like the Sylvanian Families took a bunch of acid,” comments Aisling.

Travel notes: Arrive in style like Joe and Aisling with a speed boat transfer straight from the airport. Fast Sea Transfers can also take you to Split’s nearby islands, including Hvar, Brač and the ‘Blue Grotto’ on Biševo.

Go on a Pintxo tour in San Sebastián

There were many highlights and hilarious moments from Joe and James’s whistle-stop tour of the Basque Country. But an ‘off the beaten track’ Pintxo tour of San Sebasatián’s best eateries left its mark like no other.

The resort town is famed for its delicious tapas, but this tour by Mimo ensures you’re filling up on only the finest culinary creations. James and Joe were rendered speechless after encountering a bowl of caramelised French Toast with vanilla ice cream - entering a strange table-banging reverie.

It’s like you’re asking me to choose between two perfect human beings that I’ve just met, and one of them happened to have some French Toast in their pocket.

Asked to choose between San Sebasatián and Bilbao - where they enjoyed the Guggenheim Museum and a spot of beret-buying - Off Menu podcast host Joe went with Sunny Seb. But, he added, “it’s like you’re asking me to choose between two perfect human beings that I’ve just met, and one of them happened to have some French Toast in their pocket.”

Travel notes: The Artxandako Funicular transports you up to spectacular panoramic views over Bilbao. In San Sebasatián, the comedians stayed at Arimo Hotel, a pioneering Passivhaus design that uses filtered rainwater for the toilets, and runs on clean energy.