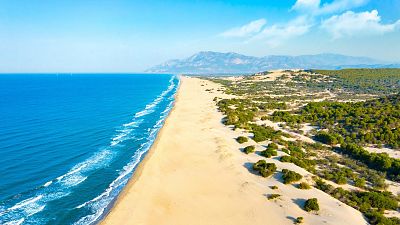 The turquoise beaches of Turkey and Cuba typically attract millions of Russian tourists. But this year they look empty, dashing hopes of a buoyant revival for the countries' tourism industries.

"We're trying to earn our bread through tourism, but it looks like the war has finished off this (tourist) season, too,” said Devrim Akcay, a store clerk in Belek, Antalya.

Turkish budget airline Pegasus has suspended flights to and from Russia until the end of March and international sanctions on Russian banks have left Russians without cash to spend.

Turkish officials had anticipated that with pandemic restrictions easing, the Turkish tourism sector would be able to replicate or exceed the numbers it reached in 2019, when some 52 million tourists traveled to the country, bringing with them US $34 billion (€31 billion) in revenue. Some seven million Russians visited Turkey in 2019.

How has the war affected Cuba’s tourism industry?

Cuba is also hurting from the lack of Russian visitors.

"Everything is very nice as you can see, but the little Russian tourism that we had when we were recovering is gone, because the war in Ukraine came and we are back in decline,” said Yirianny Lara, who runs a souvenir store in the beach town of Varadero.

The Russian Association of Tour Operators said in a statement that between 6,000 and 8,000 Russian tourists were in Cuba when the war began. Many of these travellers had to cut their holidays in Varadero and other areas short, and return on special flights days after the start of the Russian invasion of Ukraine.

Cuba re-opened its borders in mid-November 2021 to all international tourism. That year, it received only 356,470 visitors, with Russian tourists leading the pack.

Watch the video above to learn more about how the war is impacting tourism in these countries.