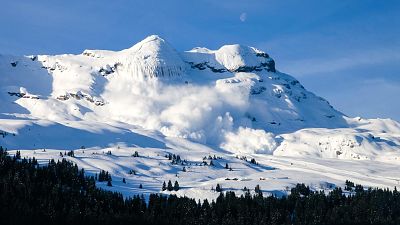 Staying safe in the mountains is at the top of every skier’s priority list.

This is more true than ever in recent years, with avalanches becoming increasingly common as a result of climate change.

As global temperatures rise, the prevalence of wet snow is causing snow slides in ski resorts around the world - from the Alps to the Rockies, and everywhere in between.

According to European Avalanche Warning Services, these geological disasters claim the lives of more than 150 people every year. Causes of death vary from suffocation, fatal wounds and severe hypothermia, all resulting from deadly masses of snow travelling at speeds greater than 320 kilometres per hour.

If that’s enough to put you off hitting the slopes this year, fear not. We sat down with two winter sports experts to find out how you can steer clear of avalanches this ski season - and prevent them from happening in the first place.

What causes an avalanche?

There are many factors that can lead to avalanches in the mountains, including fresh snowfall, high winds and rising temperatures.

Tristan Benwell is a ski instructor at Maison Sport, and like most people who spend their lives on the slopes, he’s had his fair share of close calls with ‘the white death’.

“It was small, but it was enough to take me off my feet,” says Benwell, recounting his most recent encounter with an avalanche in the Alps.

“It started to pull me downhill. It was incredibly violent, incredibly quick and incredibly disorientating. I was able to dig myself out fairly quickly in the end, but the overwhelming thing was just how fast it was.”

According to Benwell, this avalanche was caused by a ‘wind slab’ - a cohesive layer of snow formed by wind deposits on leeward terrain. This is the most common type of avalanche in the French Alps - and one that’s virtually impossible to detect.

“The wind will pick the snow up and move it from one side of the mountain to the other,” explains Benwell.

“Through the process of being blown by strong winds, the snow breaks up. The snowflakes don't bond together and you end up with chalky, unstable snow.”

For your average skier, these treacherous areas “look and feel like normal snow”. They can be both soft and hard, meaning that many people mistake them for skiable terrain as they descend down the mountain.

“But when they do go, the whole slab goes at the same time,” says Benwell, who advises skiers to check the local weather forecast before hitting the slopes.

“Fresh snow is a big indicator of an increased risk of avalanches, and the second thing is strong winds. If you get both of those, then that's going to elevate the risk even more.”

What can you do to avoid avalanches on the slopes?

In 90 per cent of cases, avalanches are triggered by the weight of skiers moving across an unstable area of snow. As the terrain gives way beneath their feet, the fast-moving snowpack gathers momentum and careers down the mountainside - often taking trees and rocks along with it.

This can happen at any time and in any place on the slopes, but the risk is drastically reduced if skiers stick to designated runs.

“The pistes are the responsibility of the resort to make safe,” says Mark Tennent, a professional guide who provides avalanche awareness courses in the French Alps.

“The moment you leave the marked runs, you are ‘off-piste’ in an unsecured area and skiing at your own risk - even just 50 metres from the slope!”

Tennent advises anyone without professional training to avoid skiing outside the boundaries of ski resorts, where the majority of avalanches regularly occur. But for those looking to test their skills on untouched terrain, he recommends taking search and rescue equipment along with them.

The life expectancy of a person buried in an avalanche is around 50 per cent after only 15 minutes.

“The key items are an avalanche transceiver, avalanche probe and a snow shovel,” explains Tennent, “however without training and regular practice, most people are unlikely to be effective.”

“The life expectancy of a person buried in an avalanche is around 50 per cent after only 15 minutes, and professional rescue services are almost always going to arrive on the scene after this time has elapsed.”

For this reason, Tennent teaches his students to detect and avoid avalanches in the first place - identifying telltale signs that indicate a snow slide could be about to take place.

“If you see cracks shooting out from under your skis, that’s a big warning sign,” continues Tennent.

“The further they go, the more unstable the snow is. Sometimes you may hear a ‘whumpf’ sound and feel the snow settle under you. This is the sound of the collapse of a weak layer in the snowpack.

“It’s always a risk, but through a combination of good planning and sound decision making, skiers can hopefully avoid being caught altogether.”

What tools do you need to survive an avalanche?

Skiing is an expensive hobby, and for many people, the likelihood of being caught in an avalanche doesn’t warrant the purchase of specialist equipment. But for those looking to explore the backcountry, an avalanche airbag could be the difference between life and death.

These backpacks can be used to carry all of your ski necessities - from your lunchtime sandwich, to that extra pair of goggles. But hidden within the lining of the bag is a specially-designed air balloon, capable of inflating at the pull of a chord.

The device takes advantage of the ‘brazil nut effect’ - a phenomenon where the largest particle in a mixture moves to the top - to keep its owner above the snowfall, instead of being dragged down into it.

“I think airbags are a great bit of kit to carry in terms of avalanche safety,” says Tristan Benwell.

“It can keep you on the surface, rather than being buried within the avalanche. It’s not a failsafe, but even if the airbag is partially buried or just poking out of the top, the bright red colour makes it super easy for authorities to locate you.”

For Mark Tennent, items like these are an additional safety measure - not something to be relied upon outright.

“If deployed correctly, airbags dramatically reduce the chance of being buried in an avalanche,” explains Tennent, “but they don’t protect you from the potential trauma caused by an uncontrolled contact with rocks or trees or being carried over a cliff.”

More often than not, they’re used for pulling out dead bodies.

This is something Benwell knows all too well from his recent encounter with ‘the white death’.

“I went to reach for my airbag to pull it, and by the time I'd located the handle, everything had slowed down and I'd come to a stop again,” says the ski instructor.

“The amount I was getting pushed about, even without getting buried, made it difficult to find the handle. If the avalanche had been more severe, there's every chance I wouldn't have been able to reach the airbag at all.”

For this reason, Benwell recommends carrying a RECCO reflector if you’re planning on skiing through untouched terrain.

“It essentially acts like a tiny mirror,” he explains. “You need a special camera to be able to pick them up. They shine it at the slope and it reflects back so they can see if someone’s there.

“You definitely shouldn’t rely on them as a way of getting rescued though. More often than not, they’re used for pulling out dead bodies.”

Getting back to basics

Gadgets like these are brilliant safety mechanisms when it comes to saving lives in extreme situations. But for our two alpine experts, they’re nothing compared to the education and experience they’ve received on the slopes.

“I would say the absolute minimum is doing a training course that teaches you how to use an avalanche transceiver, a shovel and a probe,” says Benwell, who regularly organises ski touring parties in remote regions of the Alps.

“The best thing is to go out with either an instructor or a guide, and get as much information as you can about all of the different things to be looking out for. I think spending time with people in that environment is the most important thing.”

This sentiment is echoed by Mark Tennent, who runs introductory, intermediate and full-day courses in the resorts of Courchevel, Meribel and the Tarentaise.

“The winter mountains are an exhilarating and wonderful environment,” says the mountain guide.

“But the rewards also bring risks, and the risks are very, very real.”