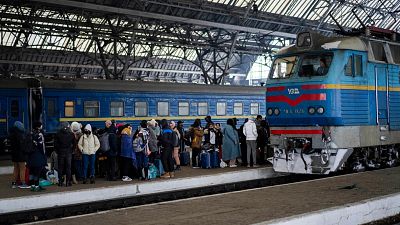 People trying to flee Ukraine stand on a platform as they wait for trains inside Lviv railway station.   -   Copyright  Bernat Armangue/Copyright 2022 The Associated Press. All rights reserved
By Euronews Travel  •  Updated: 28/02/2022

The airspace over Ukraine closed to all commercial flights on 24 February and a majority of nations are advising against travel to the country. But if travel is essential and planes aren’t landing, then what are the alternatives?

Many trains are running but stations are overwhelmed with passengers as people flee the Russian invasion. There are very few tickets available with some services now booked until March.

The latest announcement from Ukrainian Railway alleges that around half a million people have so far been evacuated, with priority given to children, women and elderly people. Ukrainian men aged between 18 and 60 are not allowed to leave the country, according to the State Border Guard Service.

Most travelling by rail are escaping Ukraine to neighbouring states and some cross-border routes are running more trains for refugees.

A number of trains are currently running to Poland, Hungary, Slovakia and the Czech Republic with a separate transport hub at Chop railway station. Depending on the flow of passengers, additional evacuation routes are being scheduled from Kyiv to Western regions of the country.

Ukrainian Railways says it is also providing help for foreign nationals that choose to stay in the country.

“People with the passport of every other country are able to leave the territory of Ukraine without restrictions. This also applies to men aged 18 to 60 years,” the company states.

What about Ukrainians travelling to other parts of Europe?

There are special considerations for those looking to travel onward once they cross the border too. German national railway, Deutsch Bahn, is collaborating with railways in Poland to add more carriages to trains for refugees.

“As of now, refugees with Ukrainian passports or identity cards can use all long-distance trains from Poland to Germany free of charge,” the company wrote on Twitter.

Austria has also confirmed that Ukrainians fleeing from war can use OeBB trains without a ticket.

Ukrainians who are fleeing from war can use @unsereoebb trains in #Austria without a ticket. In times like this, it is our responsibility to help fast and unbuerocraticly. And that is exactly what we are doing. ?? #Ukraine

“In times like this, it is our responsibility to help fast,” Leonore Gewessler, the country’s transport minister, tweeted.

The Czech Republic and Slovakia are also guaranteeing free travel for Ukrainian refugees using their own railways.

Can you travel from Ukraine to Russia?

All railway lines between Ukraine and Russia have been destroyed, according to Ukrainian Railways. They were blown up by Ukraine’s armed forces according to The Kyiv Independent.

The state rail service announced that all railway tracks from Russia to Ukraine have been blown up by Ukraine’s armed forces.

“Railroad crossings between countries that used to transport thousands of goods and bring millions of dollars to the economies of both countries have been destroyed”, the national railway operator said in a statement.

Reports say it has also terminated all relations and cooperation with Russian Railways.