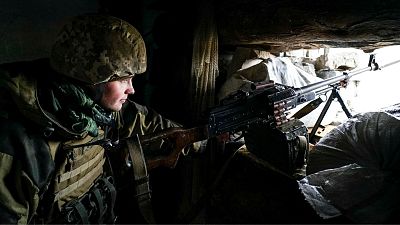 Ukrainian civilians are being enlisted to fight against Russian forces   -   Copyright  AP Photo
By Ben Anthony Horton  with AP  •  Updated: 28/02/2022

As the invasion of Ukraine enters its fifth day, many Ukrainians are now returning home to defend their nation against Russian forces.

Over 22,000 people have entered Ukraine from Poland since the Russian offensive began, according to the Polish Border Guard.

This comes after Volodymyr Zelenskyy, Ukraine’s president, offered up weapons to every citizen wishing to defend their country against the Russian military.

"I was looking at the events that are happening in Ukraine on my phone and I just couldn’t sleep calmly," says Janiel, a Ukrainian living in Wrocław who decided to fight for his country.

I woke up and I cried.

“So summing up all of those circumstances, I made a decision to come back to Ukraine and fight."

‘Keeping our land in our hands’

This is a familiar sentiment in Przemyśl - a Polish city just 20 kilometres from the Ukrainian border.

Since the fighting began, the city’s train station has been converted into a relief centre, offering food, water and logistical assistance for anyone crossing the border.

"I think that every hour we have around 100 people in this place, and it's more and more everyday,” says Marek Podraza, a local volunteer at Przemyśl Railway Station.

But while Ukrainians continue to take refuge in other countries, many others are returning to their homeland in order to defend it against Russian forces.

"It's not about the fighting and violence,” says Alexei, a Ukrainian man waiting for the next train to Kyiv.

“It’s about keeping our land in our hands. It's not right to see all of these people having to flee from our country.”

Before the invasion began, an estimated 1 million Ukrainians were working or studying in Poland.

As many as 4.5 million more are expected to leave their homeland in the coming days, as fighting intensifies in the Eastern European nation.