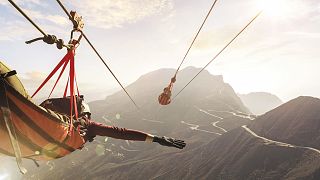 After two years of limited travel options, we’re all desperate to get out and see the world again.

There are the classic experiences that people love year in, year out, like clubbing in Ibiza, bathing in Iceland’s thermal pools, posing for Instagram snaps at Bolivia’s salt flats or visiting Tokyo’s legendary karaoke bars but this year, how about something different?

That's why we've put together Euronews Travel's Ultimate Experiences for 2022.

Here you can find three of the world’s five bioluminescent bays.

This stunning natural phenomenon is caused by tiny organisms in the water that light up when stimulated by movement.

To see the glow in all its glory, grab a paddle and hop into a clear bottomed kayak at Mosquito bay. If you time it right, the brightest glow is at the time of the month when there’s a new or crescent moon.

Stay in a vintage train carriage

At number two, why not make your South African safari even more memorable by staying in a restored vintage railway carriage?

Unlike most sleeper trains, this luxury accommodation promises a good night’s sleep and comes with it’s own private pool and incredible views overlooking the nature reserve.

Ski down a volcano

If you’re looking for a slightly cooler experience, this one is for you.

Take your ski holiday up a level and ski down a volcano in Japan.

Mabey Ski’s private guide will lead you through Hokkaido’s backcountry to ski down four volcanoes in four days including Mount Yōtei, the tallest of Niseko’s volcanoes.

If the weather is just right, you may even get to ski inside the crater of this active volcano.

At four, we’re headed to Ras Al-Khaimah, one of the UAE’s lesser known Emirates.

Here, at a height of 1,680 metres, at the top of Jebel Jais Mountain - the highest mountain peak in the UAE - is the world’s longest zip line.

Fly at speeds of up to 150 km/h along the 2.83km zip wire over the stunning desert mountains.

We dare you not to feel exhilarated doing this one!

Māori owned and operated Kaitiaki Adventures will escort you down the Kaituna River on New Zealand’s North Island.

This is one of the best spots on the planet to ride rapids and this stretch of river is home to the world’s highest commercially rafted waterfall, a whopping seven metres high.

As well as the journey down the rapids, your guide will also teach you about Māori culture, traditions and the surrounding environment.

At number six, you’re going to feel on top of the world…literally.

Set up your tent for a night on the ice cap in Greenland to witness the Northern Lights.

Greenland isn’t your typical travel destination…there’s no roads between the towns so you’ll need find an alternative mode of transport, like by dog sled.

But by visiting the world’s largest island you’ll see the climate crisis in action and it’ll change your life forever.

For number seven, we’re off to the Swiss Alps, a place where beauty is always guaranteed.

Take the cable car to the top of Schilthorn, a 2,970 metre peak and try your best James Bond impression.

The rotating restaurant at the top was featured in the 1969 Bond film On Her Majesty’s Secret Service. But if that’s not your thing why not enjoy a meal, a gig or just the spectacular views.

And last but certainly not least, at eight we’re going on a trip down the Nile.

Hop aboard the SS Sudan, the oldest steam paddle ship on the Nile which celebrates its 100th anniversary this year.

This is the very same boat that transported Agatha Christie down Egypt’s famous river and inspired her book Death On The Nile.

The journey starts in Luxor and while you’re there, cross the river to Thebes to see Tutankhamun's tomb which was discovered 100 years ago this year.

Not only that, it’s also 200 years since the Ancient Egyptian hieroglyphs were first deciphered - so 2022 is the perfect year to give it a visit.