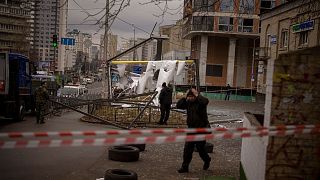 Russia has launched a full-scale invasion of Ukraine, in what the European Union is calling one of the darkest hours for Europe since World War Two.

Ukraine is fighting back, with Minister of Foreign Affairs Dmytro Kuleba telling Ukrainians around the globe that its army and diplomats are staying put.

But fearing for their lives after airstrikes began this morning, many residents are fleeing from the capital of Kyiv and other cities and attempting to travel west or out of the country.

Foreign nationals in Ukraine have been urged by governments to leave immediately if it is safe for them to do so.

Ukraine closed its airspace to civilian flights shortly before 1am today (24 February), and flights have been rerouted to steer clear of the conflict zone. There are reports of airports being bombed and military airfields being targeted by the Russian military.

Here is the latest advice from Foreign Offices in Europe and information on travel - which we will be updating throughout the day.

Governments have been urging their citizens to return from Ukraine in the build up to this war, but there are many reasons why that has not been possible for everyone living and working in the country.

Contacting your embassy is the first port of call if you are a foreign national in Ukraine. The UK Foreign Office (FCDO) states that passport-holders should register their presence in Ukraine to be contacted.

“It is likely that commercial routes out of Ukraine will be severely disrupted and roads across Ukraine could be closed,” the FCDO’s latest advice states. “If you are in the vicinity of military activity and you cannot leave safely, you should stay indoors, away from windows, and remain alert to developments that would allow you to leave safely.”

The FCDO adds that those who decide to stay in Ukraine should remain vigilant for any potential combat operations, keep their departure plans under review and ensure their travel documents are up to date.

“Before you travel inside Ukraine, you should check local measures in place under Ukraine’s State of Emergency, that roads are open and, where appropriate, that scheduled train and bus services are operating before you travel.”

France urged its citizens to “leave without delay” hours before the full-scale attack. The US State Department has advised US citizens to “depart immediately via commercial or private means.”

They have withdrawn embassy employees from Kyiv but they are maintaining “a small consular presence in Lviv” to handle emergencies. US citizens seeking emergency assistance in Ukraine should complete this online form and the State Department will respond. More advice can be found here.

A number of other embassies have also relocated to the western Ukrainian city of Lviv, including Britain, Germany, and the Netherlands.

On February 1, Canada advised its nationals to leave Ukraine. This advice remains in place and the government they say they are “working tirelessly with international partners to help ensure unhindered passage of Canadians and Permanent Residents of Canada wishing to leave Ukraine.” Emergency contact information for Canadians is available here.

What do world leaders say?

World leaders have condemned the unprovoked invasion of Ukraine in the strongest terms.

"In these dark hours, our thoughts are with Ukraine and the innocent women, men and children as they face this unprovoked attack and fear for their lives," tweeted President of the European Commission Ursual von der Leyen.

"We will hold the Kremlin accountable."

Italian Minister of Foreign Affairs Luigi Di Maio called the Russian war "a very serious and unjustified, unprovoked aggression against Ukraine, which Italy strongly condemns. A violation of international law. Italy stands alongside the Ukrainian people, together with EU and Atlantic partners.”

UK Prime Minister Boris Johnson said it is “a catastrophe for our continent.”