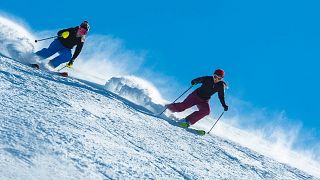 A hundred years ago, the first ever timed slalom ski race was held in Mürren - the highest ski resort in Switzerland's Bernese Oberland.

By 1936 the famous race, where you ski between poles or gates, became an Olympic discipline and this year's competition will be held in Beijing from 6 - 19 February.

However, things were quite different when the first race took place on 21 January 1922 on the grounds of Mürren’s Palace Hotel. Rather than bashing through the spring-loaded gates, competitors tried to avoid the poles at all costs.

"Back then, they had a cup in the top of the pole where they would place a tennis ball or oranges from a hotel," explains Alan Ramsay, Sales Manager for Mürren's Schilthorn cable car.

"If you hit the pole and the ball or orange fell out you had two seconds added to your time because someone had to climb back up the slope and reset the pole as there wasn't a proper drag or chair lift."

The winner of the first-ever timed slalom race in which speeding through the gates was the sole criterion for victory was English WWI veteran Johnson A. Joannides, then a resident in Mürren.

The car-free, chocolate box village is perched on a clifftop above the Lauterbrunnen valley.

The car-free, chocolate box village is perched on a clifftop above the Lauterbrunnen valley.

It is believed to have provided Tolkien with his inspiration for the valley of Rivendel in The Hobbit and The Lord of the Rings.

The village's setting, facing the iconic mountain trio of the Eiger, Mönch and Jungfrau, was also suitably dramatic to have been featured in the 1969 Bond film 'On Her Majesty’s Secret Service'.

The revolving, mountain-top Piz Gloria restaurant at the summit of the Schilthorn (2970m) was the hideout of the villain Ernst Stavro Blofeld.

Today, skiers and 007 fans can reach the top in 20 minutes thanks to the Schilthorn cablecar, instead of setting out on the four-hour hike that ski pioneers once did.

Mürren’s ties with the British date back to the Victorian era. Tour operator Henry Lunn launched it as a winter resort before the First World War.

"It was the Brits who were already taking holidays in Murren who persuaded the funicular operator to run it in winter and for hotels to stay open," says Ramsay.

A bob run from the Allmendhubel to Murrenwas was also built, but gradually skiing took over from bobsleigh and tobogganing as the sport of choice.

During the First World War, Henry Lunn's son, Arnold, introduced skiing to some of the injured British prisoners of war who interned there and played a role in developing winter sports.

"Arnold Lunn was the first guy who decided that skiing downhill was all good and fast and all the rest of it, but let's put some turns in," explains Ramsay.

"So he put poles in the snow around the funicular on the steep part above Murren. He was the first guy to put poles in and time skiers going through the poles. So the first-ever slalom was invented."

"There were no piste machines then so competitors would walk up, and prepare the area of the slalom "by stomping the snow down".

"That's how far away it was from developing into the sport it is now," Ramsay adds.

Before this, in 1921, Lunn had organised the first British Championships in the Swiss ski resort of Wengen, with a slalom which was won on style points, not speed.

After the slalom, Lunn organised the British Ski Championships in Murren in 1923, and along with other British skiers, founded the Kandahar Ski Club in the village in 1924. The aim was to promote downhill and slalom racing at a time when Alpine skiing competitions were not recognised internationally.

In January 1928, 17 Kandahar members inaugurated a marathon downhill from the Schilthorn to Lauterbrunnen. This became the first Inferno race and remains an annual fixture in Mürren.

"The first competitor took 1 hour and 30 mins to complete the 14.9km course. The second time they did it, it was 25 mins faster," says Ramsay.

"The winner walked into the hotel restaurant in Lauterbrunnen where the timekeepers were sitting around having a drink not expecting him and he shouted, "stop the clock, stop the clock!"

13 and half minutes is now the record for the race. That's an average of 60 km an hour.

"13 and half minutes is now the record for the race. The course varies depending on snow and there are some uphill stretches, but if you work it out, it's 15 minutes for 15 kilometres. That's an average of 60 km an hour."

The Inferno ski race is now the largest amateur ski race in the world with up to 1850 skiers competing each year on the course that has a 2170-metre vertical drop.

In 1924 the International Ski Federation (FIS) was founded and in 1927 it published its own rules for timed slalom. The first Alpine World Ski Championships were staged in Murren on the 19–23 February, 1931, and included a timed slalom.

"Ski racing is very much part of the culture of Murren. The ski school is now right next to the area of the first slalom. The Kandahar Ski Club has race training for kids and adults, and the ski club of Murren is over 100 years old, and has a junior section called the Bondies."

On Monday 19th January 2022, Murren will celebrate the staking out of the first modern slalom.

Visitors can join former ski racers and make a few turns through slalom poles in the Allmendhubel ski area - and a ceremony will take place where the "100 Years" plaque will be unveiled.