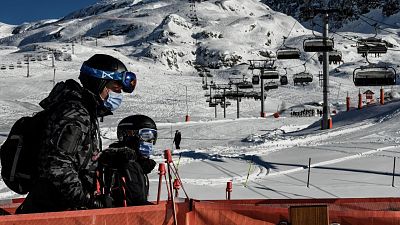 People take a ski lift wearing a mandatory mask as a preventive measure against Covid-19 at the Alpe d’Huez ski resort in France.   -   Copyright  JEFF PACHOUD/AFP or licensors   -
By Euronews Travel  •  Updated: 14/01/2022

French holiday bookings have spiked after the country’s tourism minister announced a ban on UK tourists would be lifted from Friday 14 January.

British airline Jet2 claims it has seen a “sharp and immediate” increase in bookings and searches for French ski holidays. While EasyJet reported that it had seen a 600 per cent increase in the number of people choosing to travel to popular winter sports destinations and a 386 per cent increase in flight bookings.

UK tour operator TUI also reported that ski bookings had doubled on Wednesday following reports that restrictions would be eased.

In December, France imposed a ban on UK tourists to prevent the spread of the omicron variant. Many travellers had to cancel trips and abandon plans as the ski season was set to kick off.

But on Thursday, tourism minister Jean-Baptiste Lemoyne confirmed on Twitter that vaccinated Brits would no longer need a “compelling reason” to visit France. The announcement came just days after essential business travel to the country was removed from the ban.

With the country reopening to British tourists, the skyrocketing interest in booking a last-minute ski break shows how keen people are to get back to the slopes.

Brits are ready to travel again

After pre-departure testing requirements were removed and PCR testing upon arrival scrapped in the UK, Jet2 says it also saw a 150 per cent increase in bookings when compared to the day before.

“We have seen an immediate and dramatic spike in bookings, with volumes since the Government announcement heading towards pre-pandemic levels, which demonstrates just how much demand is out there amongst people wanting to get away for a much-needed holiday,” CEO Steve Heapy said.

Jet2.com and Jet2holidays announced last week that many of their customers were “flocking to book holidays across popular sun, ski, and leisure city destinations.”

“Travelers from the UK have been patiently waiting for an ease in restrictions after the omicron variant caused many countries to close their borders to UK travellers, such as France,” says Naveen Dittakavi, CEO of online flight search company Next Vacay.

“As the Covid travel rules have relaxed, Brits are eager to book holidays to their favourite destinations as searches soar for “what do I need to travel to Spain” (+1,000%), “Morocco travel restrictions” (+900%), and “France travel restrictions from the UK” (+550%).”