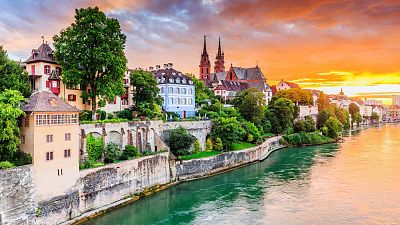 If you want to improve your quality of life, you might think about joining a gym, switching jobs or even getting a pet. But what about moving to a new city?

While a small village in France might be your first choice, cities also have many great things to offer - from amazing public transport, to leisure activities and tranquil parks.

So if the pandemic and growth of the digital nomad lifestyle mean you’re considering a move in 2022, choosing the right city for your lifestyle is really important.

To help you pick, InterNations spoke to more than 12,000 expats in 186 countries to create the Expat Insider 2021 guide. With insights on 57 different locations, the report features the best - and worst - cities for quality of life.

What are the best European cities to live in right now?

European cities dominate the top 10 ranking when it comes to quality of urban life with seven out of 10 on the continent.

InterNations has broken down its data into four subcategories, leisure and climate, transportation, safety and politics, and health and environment, asking expats how they rate different aspects of their chosen city.

Three Swiss cities made it into this year’s top 10, with Lausanne in the eighth spot, Zurich coming in sixth and Basel in second place.

Lausanne also came 21st in the overall Expat City Ranking table too, with the city performing well in the political stability and urban environment subcategories.

“It is stunningly beautiful and topographically diverse, and every season is interesting in a different way,” says a US American who took part in the study.

Basel, in northwest Switzerland also performed strongly, with 100 per cent of those surveyed saying they were happy with transportation. But, like many other émigrés in this country, they were unhappy with the cost of living - 69 per cent rated themselves dissatisfied.

The Austrian capital makes it to number one

With great stats overall, Vienna, the former home of Mozart and Beethoven comes top of the quality of urban living index. More than nine in ten expats are happy with the availability of healthcare (compared to 76 per cent globally) while 88 per cent find the city affordable too.

Vienna also did well in the transportation subcategory and a majority of respondents are happy with their work-life balance - 74 per cent compared to 66 per cent globally.

Vienna also did well in the transportation subcategory and a majority of respondents are happy with their work-life balance - 74 per cent compared to 66 per cent globally.

“I like that I have a good job with a great work-life balance and that it is fairly paid,” states one Russian living abroad in the city.

It’s not all good news for Vienna though. In fact the city actually comes last in the ‘local friendless category’. So if you’re looking to make friends, perhaps head to one of these countries instead.

43 per cent of people who took part in the survey deemed locals ‘unfriendly’ compared to a global average of 16 per cent. 44 per cent say that they are struggling to make new friends.

What other European cities make the top ten?

Prague comes in fifth in the quality of urban life rankings and makes the top ten in the overall Expat City Ranking too, coming in seventh.

“I enjoy the great opportunities for socialising, activities, and travelling, and personal growth,” says an expat from Ukraine who took part in the survey.

Other European cities including Madrid, Munich and Copenhagen also feature in the top ten.

What cities should you avoid if you want a good quality of life?

While Johannesburg in South Africa was ranked worst over all, two European cities also made it into the bottom 10 for their quality of life.

The historic Italian city of Rome came second from the bottom and also ranks last overall in the Expat City Index.

The historic Italian city of Rome came second from the bottom and also ranks last overall in the Expat City Index.

Almost half of those surveyed here (47 per cent) say they are unhappy with public transport, while 60 per cent are dissatisfied with career opportunities. 45 per cent are worried about job security (compared to 20 per cent globally).

An émigré from the UK summed up the situation, “the economy is terrible, and salaries are low.”

In fact, the only positive thing that those surveyed had to say about Rome was that the weather was good - with 86 per cent of respondents rating it positively.

The second European city to make the bottom 10 was Dublin, which came in 54th place in the quality of living index and 45th place overall.

“The housing crisis is a real problem; the rent is simply too high,” a Dutch expat explains.

Nearly four in five expats in Dublin rate the cost of living negatively with 79 per cent saying it is expensive compared to 39 per cent globally.

There is one silver lining in the city’s results from the survey, however. Many expats rate Dublin as friendly, with 86 per cent describing the local people as easy to get along with.