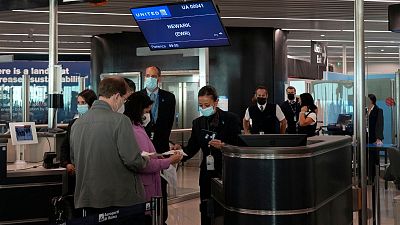 Travellers arriving at the EU’s borders next year will be met with a slick new system.

In a move to tighten security across the continent, electronic passport scanners are being installed to check the status of non-EU nationals, including Brits, Americans and Australians.

The new Entry-Exit System (EES), which has been in the works since 2016, will replace the current system of border guards stamping passports.

The system will feel familiar to travellers used to using biometric scanners at airports. But where the current ones only check that the photo matches your face, the EES tech will also calculate how long you’re allowed to stay in the EU - among other details.

There’s no change to visa rules for visitors, so the duration of your stay will either be noted as 90 days maximum (under short stay rules) or for however long the visa linked to your passport permits.

Non-EU citizens who reside in the Schengen Zone do not need to use the new system, however. “Their personal data will not be registered in the Entry/Exit System,” the European Commission told The Local. “It is enough if holders of such documents present them to the border guards to prove their status.”

The EES will only operate on the EU’s external borders - so for Americans flying into Italy, for example, or Brits crossing into France - rather than between countries in the EU like Italy and France.

Why is a new Entry-Exit System being launched?

It’s been described as “essentially a security update” which will speed up entry for travellers, but there’s no doubt that the new system is primarily intended to toughen Europe’s borders.

As well as clocking the length of travellers’ visits, the scanners will check whether your passport has ever been flagged for immigration offences such as overstaying a visa.

The European Commission says the EES will “allow an enhanced detection of stolen identities and any nationals who overstay their permitted time.”

This will see a pooling of information among all EU member states, with criminal identities and intelligence shared with law authorities, consular offices for visa services, and Europol.

On a less serious note, it’s also hoped that the scanners will spell an end to the inconsistent passport stamping that non-EU nationals living in EU countries have experienced. This has reportedly been a particular problem for Brits since Brexit who have been left “frustrated” by incorrect stamps, writes The Local.

The EES is expected to come into force in the first six months of 2022, after a delayed start due to the pandemic.

It is one of a number of new measures, alongside the ‘European Travel Information and Authorisation System’ (ETIAS) which will see non-EU citizens charged €7 to enter the EU.

For those without biometric passports, the European Commission tells Euronews Travel that passports will not be the only point of reference. Identifiers "read on the spot" will be compared with those stored in the EES, allowing non-EU nationals to pass through.