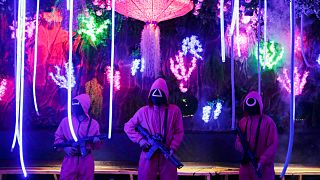 As Indonesia reopens its borders to international tourism, businesses are coming up with creative ways to get customers through the door.

While many companies are struggling to recover their losses after the pandemic, one cafe in the nation’s capital, Jakarta, has jumped on the Netflix craze that's taken the world by storm.

The world’s fourth most populous nation was hit hard by the COVID-19 pandemic, as government mandates saw the country endure long and extensive lockdowns over the past 18 months.

Strawberry Cafe in Jakarta’s Green Ville neighbourhood is boosting its post-pandemic recovery by transforming the cafe space into a replica of the South Korean Netflix hit, Squid Game.

Upon arrival, customers are greeted by staff dressed as the ominous hooded and masked guards from the South Korean TV show, and that is where the games begin.

To access the cafe and the games inside, visitors must complete a game of red light, green light in a dark room decorated with glowing neon.

The new theme has proven to be a hit and Putra Priyadi, the cafe's owner claims that business has tripled since the renovation and reopening last week.

The dystopian drama Squid Game is the streaming service's biggest original series launch, the South Korean series broke all the Netflix records and was streamed by 111 million accounts in just 27 days.

Squid Game has been especially popular in Indonesia, where Korean dramas and Korean movies already have a large following.