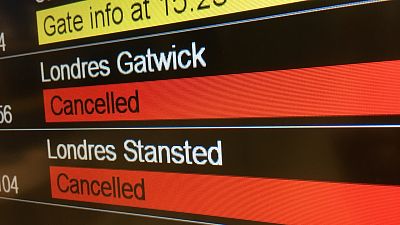 Morocco has suspended flights to the UK, Germany and the Netherlands due to the rise in COVID-19 cases.

The North African country issued the ban last night. There is no mentioned timeline as to when flights will be reinstated.

The move comes in response to the growing number of COVID-19 cases across Europe.

The news was announced on Twitter by the national air carrier Royal Air Maroc.

“Upon decisions of national authorities and following the pandemic situation, flights from/to Germany, Netherlands and the UK are suspended from today, Wednesday 20th Oct at 23:59.”

Upon decisions of national authorities and following the pandemic situation, flights from/to Germany, Netherlands and the UK are suspended from today, Wednesday 20th Oct at 23:59.

On Monday, Morocco’s Health Ministry stressed “the need to avoid possible a relapse of serious and critical cases and COVID-19-related deaths, which have occurred in several European countries.”

In the UK, there has been a sharp increase in daily rates of infection.

For the past eight days, there have been over 40,000 new daily cases. And nearly 50,000 people reported new infections on Wednesday.

On Tuesday, 223 deaths from COVID-19 were reported in the UK, the highest figure since 10 March.

In Germany and the Netherlands, there has also been a recent rise in cases.

What should you do if you’re in Morocco right now?

As the travel ban came in almost immediately, many British, Dutch and German travellers currently in Morocco are wondering how they’re going to get home.

In the announcement tweet from Royal Air Maroc, the carrier also states, “To support our passengers during this period, unlimited changes of ticket date and destination, free of charge until December 15,2021 to the same or another destination are authorized.”

Following the suspension, Easyjet, Ryanair, British Airways and Tui have all cancelled flights from Morocco to the UK.

“We are still awaiting clarity from the Moroccan authorities as to whether we are permitted to operate repatriation flights beyond midnight today, an Easyjet spokesperson said.

Noting the suspension of flights until 30 November, they continued that, “pending guidance from the Moroccan government, we intend to fly inbound in the coming days to offer passengers repatriation flight options.”

“We are contacting all customers whose flights are cancelled with their options which include a free of charge transfer, receiving a voucher or a refund.”

The UK government has updated its travel advice to say, “Travellers affected by flight cancellations should contact their airline or tour operator for advice on alternative routes via third countries (eg France, Spain) where flights are operating as normal.”

Does this signal the beginning of the next wave of lockdowns?

The move piques British fears that daily case rises may lead to renewed pandemic restrictions in the country.

Yesterday, The UK’s secretary of state for health and social care, Sajid Javid warned that unless more people got booster jabs and started wearing masks then earlier restrictions may be reinstated.

Worried about a potential return to 100,000 new daily cases, Javid said, “if not enough people get their booster jabs, if not enough of those people that were eligible for the original offer... if they don't come forward, if people don't wear masks when they really should in a really crowded place with lots of people that they don't normally hang out with, if they're not washing their hands and stuff, it's going to hit us all.”

With cases rising in Europe, lockdown measures may not be a thing of the past.

Earlier this month, Latvia declared a three-month state of emergency in response to rising covid-19 infections.

Under the new rules, masks are mandatory in all public buildings, and all public employees must be vaccinated by 15 November.

Latvians who are not vaccinated will not be allowed to enter supermarkets from Monday.