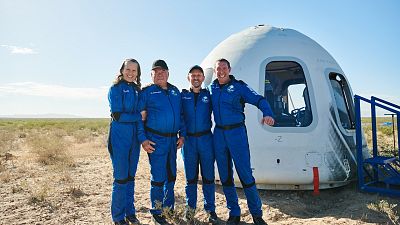 William Shatner became the world’s oldest ever astronaut this week. The 90-year-old blasted into space aboard a Blue Origin rocket.

With a near 2.5 hour build-up to the launch, live webcast presenters Arianne Cornell and Jacki Cortese had plenty of airtime to fill.

So they showed us round the luxurious Astronaut Village in Texas.

The launch site, near Van Horn in Texas, is what we would call 'laid-back desert chic', full of space-age caravans, campfires and outdoor BBQs.

“The astronaut village itself is just 10 minutes away from the launch site, nestled in the beautiful valley of west Texas. It’s built around that fire pit, but each astronaut gets this pretty luxe Airstream,” explains Cornell, the Senior Director of Astronaut and Orbital Sales.

Each Airstream looks like the inside of a modern spaceship and comes kitted out with flatscreen TVs, a walk-in shower and white walls.

“We wanted to build something that really felt part of this Texas environment," continues Cornell.

The village comes with a catering team, serving up pan-fried scallops to keep the team's protein levels topped up.

The glamour doesn't stop there though. The village also comes with a catering team, serving up pan-fried scallops to keep the team's protein levels topped up.

There are even Blue Origin cocktails, perfect for sipping if you've got any pre-launch nerves.

Though the village isn't open to visitors at the moment, it could offer a unique experience for those wanting to bask in the new space age spirit of adventure. Whether that's sampling the food or staying in the same Airstream as William Shatner.

If you prefer alfresco dining, there's also an outdoor seating area, where trainee astronauts - or tourists of the future - can bond.

"There's nothing like a glass of champagne around the campfire," says Cornell.

"Everything is designed so that the crew can get to know each other, and relax and have that comfort as they prepare for their flight to space," says Cortese.