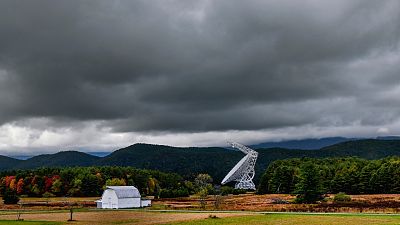 Welcome to Green Bank, the tiny US town which has become a haven for people fleeing the digital age.

The town in West Virginia is home to the six-decade-old Green Bank Observatory, which requires complete radio silence so it can peer deep into space.

As a consequence, cell phone service in Green Bank is almost entirely barred.

"Coming here and being able to get away from the internet, there is a certain cleansing that comes to you, that gives you time to clear your mind," says Yvonne Wallech, a 59-year-old gift shop owner who moved to the town six years ago.

To protect the observatory's work - as well as the operations of a nearby spy installation - the US government created the National Radio Quiet Zone in 1958.

The zone imposes limits on man made radio waves in the 13,000 square miles that surround Green Bank. These restrictions include both mobile phone signals and WiFi routers.

"In a world today where we can never go more than a minute or two without hearing the beep or the buzz of a technology device, it is the place you can go to get away from all of this," says Chelsea Ruby, the state's secretary of tourism.

This resonates in a country like the United States, where 85 per cent of adults have a smartphone and nearly a third report they are "almost constantly" online.

"You visit, you listen to other people," says Nancy Showalter, a 78-year-old tourist visiting the observatory from Indiana.

"I think it's wonderful. I think more people should do it."

But not everyone agrees.

Green Bank native Patrick Coleman, 69, argues that the lack of cell service is dangerous and needs to end.

"People that live in this area are denied a safety net," the bed and breakfast owner says, citing car accidents in remote areas which “could leave people stranded.”

Cell phone service is already available at the nearby Snowshoe ski resort, which draws in thousands of tourists throughout the winter months.

As a result, property values in surrounding Pocahontas County have increased to triple the national rate over the past decade.

"They may very well want to get a Walmart right here and Kroger's right here and all the things that they've spent their life being used to," says long-time local George Deike, referring to the influx of outsiders.

"I don't know whether the whole world has to be like that," adds Deike, who runs an equestrian retreat.

But like many new residents in Green Bank, Ned Dougherty came to the town because he was intrigued by its less-connected lifestyle.

"I came here hoping for a quieter zone, a place without WiFi," the 38-year-old teacher says. "Everybody wishes this was the Shangri-La of quiet."

But he says there's a more direct way to get control of one's digital life.

"I don't have to use my phone, no matter where I live. If I want to turn it off, I have to do it myself. And I think we all know we should."